Students undertaking an environmental health monitoring course at Massey University in Wellington are the first in New Zealand to use a new rapid automated microbiology detection system to monitor water quality.

The students used Thermo Fisher’s TECTA B16 system to detect total coliforms and E.coli in drinking water and river water samples from a range of sites in the Wellington Region.

Stan Abbott, course supervisor and leader of Massey’s Roof Water Harvesting Centre, was amazed at how quickly the students familiarised themselves with the sophisticated workings of the TECTA B16 machine.

“In this digital age our students are all so tech savvy, they understood how to operate the machine with a minimum of fuss, much like them using a new computer or smartphone for the first time,” Mr Abbott said. 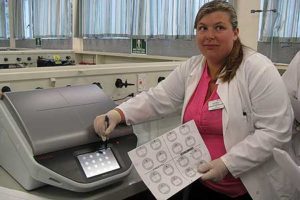 “This new monitoring system is relevant also to the E.coli threshold level, which has been hotly debated around the government’s recent launch of its new Clean Water policy,” Mr Abbott said.

“There has been an endless tide of opinions about the risks that will confront the public when they swim in many of New Zealand’s rivers and lakes, proving that water quality safety for both drinking and swimming in is paramount.”

Mr Abbott believes the major advantages of the TECTA B16 automated detection system include: 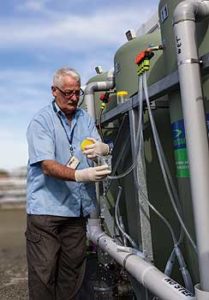 Stan Abbott from the Roof Water Harvesting Centre in Wellington.

Mr Abbott said another huge advantage is that the machine automatically transmits the data through a network connection to allow immediate notification on electronic devices, such as mobile phones or laptops, as soon as a contaminated water sample is detected.

“Total coliform and E.coli results are available in two to 18 hours, depending on the level of contamination in the water sample. This immediate notification and early warning of positive sample results as soon as they occur should revolutionise water testing,” Mr Abbott said.

The TECTA B16 system received United States Environmental Protection Agency approval in 2014 and the New Zealand Ministry of Health approved the system for testing drinking water samples for compliance in August 2016.

Currently three water testing agencies in New Zealand have purchased the system. Mr Abbott expects more will do so in the future given the importance of water quality monitoring in New Zealand.

This partner content is brought to you by Thermo Fisher Scientific ANZ. For more information, visit thermofisher.com.au/tecta.