Hydro Tasmania has installed a 600 kilowatt (kW) solar array at Rottnest Island, integrating it into the existing power system to boost its renewable energy capacity as part of the Rottnest Island Water and Renewable Energy Nexus Project (WREN).

Hydro Tasmania’s Hybrid Energy Solutions team is implementing the new power system that will see 45 per cent of the island powered by renewables, and up to 90 per cent instantaneous renewable contribution.

The team also installed a hybrid control system which will enable better management of the variable renewable generation and reduce diesel fuel consumption. 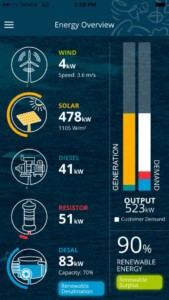 The hybrid control system coordinates the generation (wind, solar and low load diesels) with enabling technologies, including a dynamic resistor and demand management of the desalination plant.

Until the late 1970s, diesel generation was virtually the only source of electricity on Rottnest Island. Experimental wind turbines began limiting diesel use, but it wasn’t until 2004 that a 600kW wind-diesel hybrid system was installed, generating about a third of Rottnest’s energy and saving about 400,000 litres of diesel each year.

Given the precious and delicate environmental values of Rottnest Island, its residents and visitors have desired a more comprehensively sustainable way to power its needs.

Hydro Tasmania’s King Island Renewable Energy Integration Project on the remote Bass Strait island has already transformed it from 100 per cent reliant on diesel power to about 65 per cent renewably powered, and fully-renewable on occasions. A similar project is taking shape on neighbouring Flinders Island.

An app called “Rottnest Island Water and renewable energy nexus” can be downloaded for both Apple and Android, providing real-time power usage, project information and educational materials. Visitors can use the app to learn more about sustainability on Rottnest Island and how they can make a sustainable difference.