There are 500km of waterways within the City of Gold Coast, which means the city also has a large number of bridges. Gold Coast Water, which is responsible for providing water and sewerage services to the City, also has over 500 sewage pump stations. This means that on a number of bridges, there are pipelines which have sewer air valves installed.

Over the years these valves have been a source of odour and noise complaints among local residents.

“We found that when the valves released methane gas, vehicles passing over the bridge would drag the gas to the nearest resident living close to the bridge,” said Paul Heaton, Director of Gold Coast Water.

The City also found that noise complaints were an issue. When the valves released late at night or early in the morning, the noise they emitted would disturb nearby residents while they were trying to sleep.

“With some innovative thinking, our staff came up with a design to not only control the odour issue but resolve the noise issue at the same time,” said Mr Heaton.

Jason Vade, Sewerage Maintenance Team Leader explains: “By attaching a cam lock to the outlet of the air valve, we were able to run a 50mm hose from the valve – usually inside a conduit for sun protection – and run it off the bridge to a convenient location beside the bridge.

“This hose then runs into the bottom of a 210 litre polyurethane drum. Inside the drum, staff installed a 50mm PVC pipe drilled with holes to allow the gas to be emitted. Stainless steel mesh installed just above the pipe work ensures carbon doesn’t fill the holes in the pipe work. Around the pipework, under the mesh, gravel was inserted for drainage purposes (condensation) and a small 25mm ball valve installed.”

The drums are filled with approximately 60­70kg of activated carbon. In the lid of the drum, or on top of the protection box, staff installed a 100mm vent to allow the gas to escape after being treated. 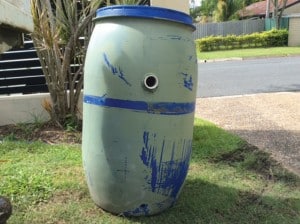 One of the drums connected to the valves.

“Depending on the location, we may put the drum inside a green protection cabinet to deter vandals,” said Mr Vade. “This is also more aesthetically pleasing for the neighbourhood and local environment.”

The units are on a scheduled maintenance program for staff to regularly check the quality of the carbon. “If the carbon requires changing we simply vacuum it out with a small commercial wet/dry vacuum or vac truck,” said Mr Vade.

The first of these drums was installed about seven years ago, and there are now approximately twelve installed on Gold Coast bridges.

“This has been a great result, and it requires minimal maintenance,” said Mr Heaton. “We believe sharing this information can be of use to other councils, water service providers and contractors.”