Partnership to generate biogas from food waste in SEQ Urban Utilities has partnered with Cleanaway to generate renewable energy from organic food waste in an effort to divert food waste from landfill in South East Queensland.

The South East Queensland utility will treat fat, oil and grease waste Cleanaway collects from the region’s restaurants as well as food waste that’s unable to be sold or donated from major supermarkets, at its Luggage Point Resource Recovery Centre.

“As Queensland’s largest utility we treat the wastewater of 1.5 million people across our region every day and treating industry organic waste is also part of our everyday operations,” Mr Magee said.

“Over the past 18 months, we’ve been working with Cleanaway to successfully treat fat, oil and grease waste and use it to generate clean energy using our anaerobic digesters at Luggage Point.

“The digesters break down the liquid waste and generate biogas that can be fed into our cogeneration units, which are essentially giant engines, to create renewable electricity.” 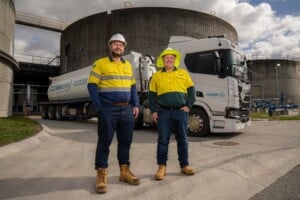 “We’re passionate about supporting a circular economy in our region to promote a healthy, sustainable and liveable future for South East Queensland,” Mr Magee said.

“At full scale, we’ll work with Cleanaway to treat up to 32 million litres – or 13 Olympic swimming pools worth – of organic liquid food and fat, oil and grease waste from restaurants and supermarkets across our region each year.

“We’ll use the electricity generated from treating that waste to help power our Luggage Point Resource Recovery Centre, reducing our carbon emissions by increasing our use of renewable energy.”

Cleanaway South East Queensland Liquids Collections Branch Manager, Steven Trajceski, said food waste was one of the most under-recycled waste streams, commonly going into general waste instead of being recovered as a nutrient-rich resource.

“Food waste is becoming an increasingly important challenge to address, particularly as our population grows, and we want to avoid organics ending up in landfill wherever we can,” Mr Trajceski said.

“Through our new partnership with Urban Utilities, we’ve found a cleaner, greener way to beneficially reuse both organic food waste and fat, oil and grease waste.”

“We’re proud to be part of a partnership that is providing enhanced environmental outcomes for our region and we’re excited to explore more opportunities to create valuable partnerships in this space,” Mr Magee said.