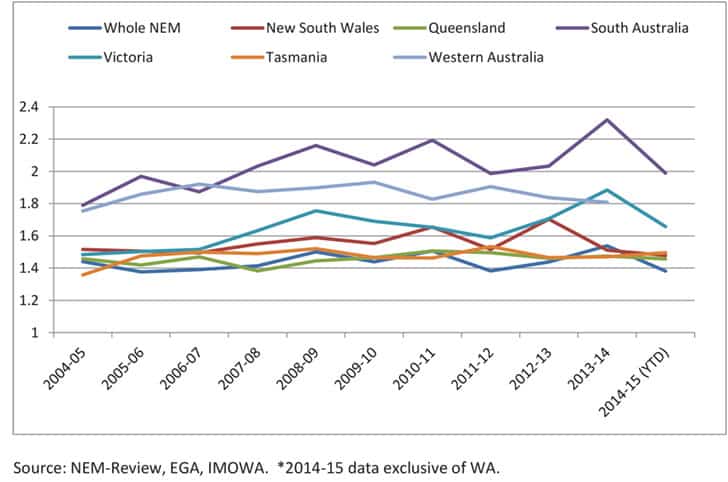 Across Australia, there is considerable fluctuation in the peak loads placed on electricity networks, as opposed to the average load, with considerably increased demand in extreme heat. Here, Energy Supply Association of Australia (ESAA) Data and Statistical Analyst Nick Cannard provides a comprehensive overview of the variation in load different states face in peak versus average conditions.

There has been much discussion about Australia’s electricity demand, in particular the decline in consumption (average demand) over the last five years. This has been largely due to growth in residential solar panels, improved energy efficiency and reduced industrial load as a result of structural changes in the economy.

As average demand continues to fall, peak demand does not need to reach historical highs to lead to high peak to average ratios. South Australia and Victoria achieved their highest ratios in 2013-14 when several days of extreme heat led to demand levels just short of the records while New South Wales achieved its highest ratio in 2012-13. The highest annual peak regional demand for South Australia and New South Wales occurred in 2010-11 while in Victoria peak demand occurred back in 2008-09. 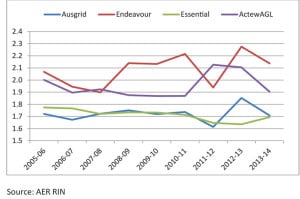 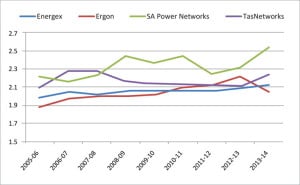 Each jurisdiction faces different challenges, which include extreme weather events, natural disasters, isolated customers and different topographies for distributors to contend with. Demand is highly dependent on weather and occurs during the summer for all regions except for Tasmania where peak occurs during winter and New South Wales can change depending on the extremes of the two seasons.

Regional demand includes large industrial loads which are directly connected to the transmission rather than the distribution network. Most business and all residential customers, including those with embedded generation, are supplied from the distribution system.

Figures 2, 3 and 4 show the peak to average demand ratio for each distributor in the NEM. Peak demand is calculated by summing non-coincidental peak demand at each substation in the network, with the exception of ActewAGL and TasNetworks, where transmission connection point data is used instead. Accordingly, the figures for these two networks are not directly comparable to other networks.

Distributors must cater for maximum demand in their region of operation. SA Power Networks and United Energy experience consistently high ratios. SA Power Networks is the only distribution network in South Australia whose regional demand ratio is also the highest of all jurisdictions (see Figure 1). United Energy in Victoria is substantially different to the Victorian jurisdictional ratio, which varies between 1.5 and 1.9.

The average United Energy ratio is 2.18 with a maximum of 2.36. The data for the Victorian heatwave in 2014, where the regional demand ratio recorded its maximum value of 1.9, is yet to be reported to the AER. South Australia experienced a heatwave over the same period and recorded the highest ratio of 2.53 for this period. Table 1 shows the difference for each distributor in their respective regions for the peak to average ratio. 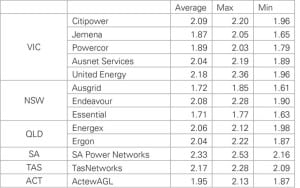 II AER RIN data, non-coincidental peak demand at a substation level has been used for all companies excluding TasNetworks and ActewAGL where non-coincidental peak demand at the transmission point is used. Average demand has been calculated as energy delivered across the DNSP system divided by the number of period hours, 8760. As upgrades and network maintenance occur across the entire distribution network to cater for these peaks, this is the best representation of how large the gap is between average demand and peak demand. Victoria reports for the calendar year while all other jurisdictions report on a financial year basis.