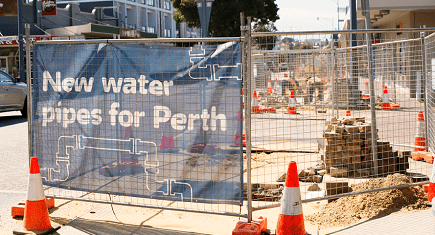 Water Corporation has announced that works to replace 2.1km of aging water pipe along Beaufort Street in the City of Stirling, Perth, have commenced.

The three-stage works between April and November are part of the Water Corporations broader Perth-wide replacement of outdated pipes in their network.

The City of Stirling will be providing up-to-date information to the community so that people can continue to visit local businesses and plan their journey around the disruptions.

The first stage of the works commences on 26 April, with northbound traffic between Walcott Street and First Avenue in Mount Lawley being disrupted for a period of approximately eight weeks.

Stage Two will take place between First Avenue and Central Avenue immediately following the completion of Stage One, with northbound traffic being disrupted for around eight weeks between July and August.

Stage Three will take place from Central Avenue to Dundas Road in Inglewood.

During construction, both lanes of Beaufort Street northbound will be closed within the stage area and detours will be in place. 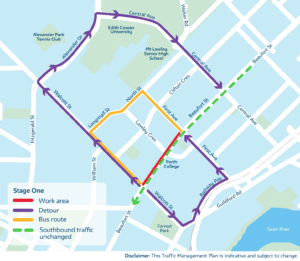 Water Corporation will be releasing traffic detour maps on their project webpage, which will be shared by the City of Stirling. Beaufort Street southbound will remain unchanged.

Access to side streets and car parks will be available during the works from the southbound lanes. All construction work will be undertaken within the road, so pedestrian access to businesses will remain open throughout the period.

The City encourages the community to continue visiting local businesses who may be impacted by the construction.

The works will be carried out on weekdays between 7am and 5pm, and between 7am and 3pm on Saturdays via open trench excavation within the road reserve behind construction fencing.