Pipeline to boost jobs in Bundaberg The first pipes have been laid for the Australian Gas Networks’ $19.8million Bundaberg Port Gas Pipeline, which is predicted to boost jobs in the Bundaberg region. 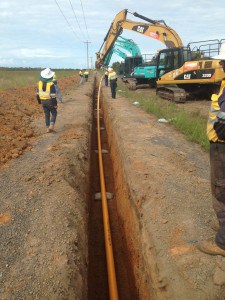 Australian Gas Networks Chief Operating Officer, Mr Andrew Staniford, said the company is excited to be playing an integral role in delivering the infrastructure project to the region.

“The Bundaberg Port Gas Pipeline – which is expected to deliver a major and much needed economic boost for the area – is progressing well,” Mr Staniford said.

“Construction of the pipeline is now well and truly underway, and will take about six months to complete followed by tie-ins to facilities and gas commissioning.

“Everything is on target for the pipeline to be commissioned and fully operational in December.”

Mr Staniford said a key function of the much-anticipated pipeline will be its support of the development of the new $70million Knauf Plasterboard facility.

Further, at the peak of the pipeline’s construction up to 50 jobs will be created, including from the local workforce.

“Crucially, not only will the pipeline have the capacity to deliver a further 0.7 terrajoules of gas per day above that required to meet Knauf’s needs, it also has the potential to fuel new business and industry, and create further new jobs in the area – and that is exciting news for the region,” Mr Staniford said.