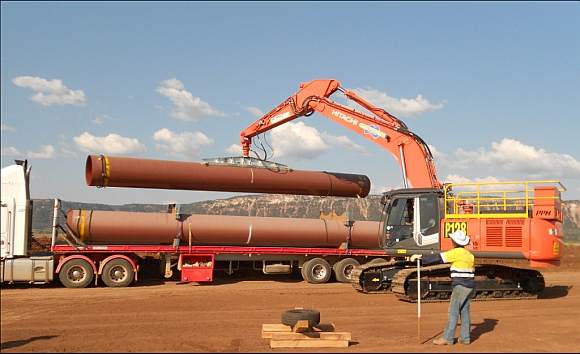 A $17 million pipeline project to deliver secure water supplies to the Port Wakefield region and the Yorke Peninsula in South Australia has reached a significant milestone with major trenching work beginning.

Minister for Water Ian Hunter says the pipeline project is a significant investment in the State’s northern region supporting expanding industries in the area and mining developments, as well as catering for future residential development.

“The pipeline will deliver a number of benefits to the local community including job opportunities through on-farm and support roles in the animal industry, the retail trade and food services sector, and flow-on employment through suppliers, transport, and equipment,” he says.

“It will also support the mining operations of Rex Minerals and associated economic development, which will also help to stimulate jobs and economic growth in the region.

“The 43-kilometre pipeline will have the capacity to deliver an extra 11.4 megalitres of peak daily supply along the pipeline route, and will also be able to cater for five projected new chicken farms,” he says.

The project has received Federal Government funding, with the Wakefield Regional Council partnering with SA Water to secure a grant of up to $10 million through the Regional Development Australia Fund.

The State Government and SA Water are funding the remaining project cost.

The Managing Director and Chief Executive Officer of Rex Minerals, Mark Parry, says the start of the pipeline is the first stage of an important infrastructure project that will assist in the development of the Hillside Copper mine.
“Our investment in this project has been possible due to the co-investment model utilised, and underscores the pro-active and co-operative approach of all parties,” he says.

Minister Hunter says the project demonstrates how all levels of government, the private sector, and the community can work together to facilitate regional development.

Work on the pipeline between Auburn and the Port Wakefield township is expected to be complete by early 2014.