Powering up Perth: the Western Power Hay to Milligan Project Western Power is a State Government-owned corporation responsible for building, maintaining and operating an electricity network that connects 2.3 million customers in the southwest corner of Western Australia.

Part of the $37 million Western Power project was the installation of a 132kV underground cable circuit between the existing Hay Street Substation (HAY) and Milligan Street substation (MIL) in the Perth CBD – to meet N-2 CBD reliability requirements.

A ROI was released to the market in late 2016 followed by a tender process in 2017. Following in-depth negotiations, Daly’s Constructions was awarded the project in August 2018.

The contract was awarded on an EPC basis, with Daly’s responsible for:

• Approvals from all stakeholders

• Procurement of all materials including 132kV power cable, cable joints, accessories and all civil construction materials

Daly’s partnered with Taihan Electric Australia to deliver the project.

In addition to working with Western Power, complex engagement, negotiations and approvals in the design phase were required from major stakeholders, including:

One of the key challenges experienced during the project included: confirming a route that would satisfy third party approval requirements and minimise disruption to the CBD, whilst achieving the required circuit rating where the circuit is to be installed in close proximity to existing 132kV feeders. 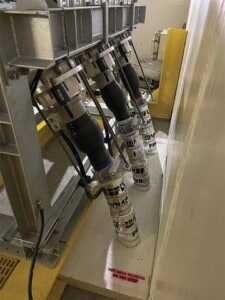 One of the more challenging road crossings was the Hay St and Milligan St intersection. This road crossing was completed over a weekend commencing on Friday evening, running back-to-back crews for 60 hours through to the Monday morning.

This involved the removal of oil filled 132kV cables and asbestos conduits, excavating at 2.7m depth in sand using shoring boxes adjacent to live traffic whilst crossing some 15 live services.

• The requirement that the road network was to be available at the completion of each night shift to enable normal traffic flows, thus limiting disruptions to the road network and the public. This was the first time this methodology was engaged on a transmission project in central Perth Western Power Project Manager, Ian Anderson, said one of the big successes of the project has been a new technique to lay the cable conduits in short sections in high traffic areas, reducing the impact on commuters.

“Each night, Daly’s excavated a short section of the route, say 20m, laid the conduits, installed thermal backfill and added fresh asphalt, ready to be driven over the next morning. It’s been a new way of working for us which worked really well.

“The disruption to everyday life in the CBD was incredibly minimal given the importance of the route we are taking and it has saved a huge amount of costs in traffic management.”

The project’s safety performance was outstanding, with no recordable incidents during the construction phase. Two sleeve bores under the Perth metro rail system either side of the Perth train station were also a highlight. These were achieved after prolonged negotiations with the PTA and the minimal construction window approved for each shift.

The drill shots were six metres deep with significant groundwater to manage.

Another success was the cable installation in an urban environment and up four levels in existing substations, as well as the cooperative and outcome-driven approach between Western Power and Daly’s facilitating the successful delivery of the project.

“This project was one of Daly’s Construction’s most challenging undertakings and relied heavily on some of our most experienced people to deliver it.” 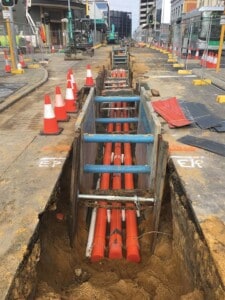 This Sponsored Editorial was brought to you by Daly’s Constructions.