Murray Irrigation’s inspection of its Lawson Syphon irrigation site was an exercise in confined space condition assessment. Thanks to careful planning and modern technology, specialist engineers were able to safely enter the syphon and gather vital information needed to assess the state of the asset. 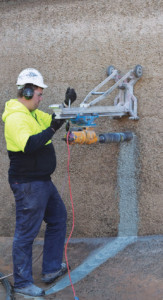 The 700m long river management asset diverts the Mulwala Canal under the Edward River, helping to deliver water to over 140,000ha of land around Deniliquin, New South Wales.

As this aging piece of infrastructure is so vital to the community, Murray Irrigation needed to know its current condition and expected lifespan.

So in July, a ground-breaking inspection did some testing and collected concrete core and soil samples from the Edward River Escape and the Lawson Syphon.

The structural condition assessment was planned and carried out by Murray Irrigation and tier one engineers from AECOM and Interflow.

Due to the high risks associated with working in confined spaces, the job required some additional considerations.

“The engineers descended 25m into the syphon entry points, which will provide a thorough indication of the condition of the asset and an estimate of its remaining life,” Mr Luengas said.

WHS Supervisor, Tat Whaleboat, said there were a number of safety considerations that were taken into account before entering or working within the confined space.

Initial atmospheric testing is also done in the confined space before any work commences.

This helps to mitigate many of the risks associated with a project of this nature.

The inspection of the Lawson Syphon was a success, with Nick Roth, Field Operations Manager at Interflow, crediting the outcome to a number of parties that worked together.

“Due to good planning from the project team and everyone involved, the job was completed safely and everyone was able to go home safely at the end of their workday,” Mr Roth said.

A full report on the inspection will be released later this year.