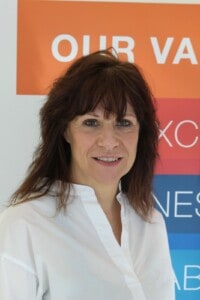 Another utility leader has been named as one of this year’s Top 50 Public Sector Women by the Institute of Public Administration Australia (Victoria) (IPAA Victoria).

“This award is a fantastic recognition of the achievements of all women across the public sector in Victoria and for encouraging other women in the sector. It is also great recognition for 15 years’ contribution to the water industry,” Ms Smith said.

“For anyone wanting to become a leader I would advise to follow your passion. Work in a sector that shares your vision and passion, and find a mentor who leads by example and inspires you.”

As GMW’s General Manager of People, Culture and Safety, Ms Smith joins an alumnae of 150 women, including GMW Managing Director, Charmaine Quick, recognised over three years for their inspiration and accomplishment.

“Glenda is a genuine change leader when it comes to our people, culture and safety at GMW,” Ms Quick said.

“She is a role model across the business and is inspiring colleagues and staff at all levels on a daily basis to go above and beyond.”

At GMW, Ms Smith has been instrumental in driving significant people, culture and safety changes across the business and achieving the organisation’s transformation agenda.

Since joining the GMW team in 2019, Ms Smith has led a range of innovative practices, including 360-degree feedback for the Executive Leadership Team, as well as being a visionary for the organisation’s human resourcing and building a roadmap over the next five years.

Ms Smith is passionate about the water industry, promoting diversity and developing capability that Victoria needs to ensure a safe and sustainable water supply.

Ms Smith has worked for the Victorian Government and not-for-profit sector for close to 20 years, the past 15 years working in a number of human resources roles within the water sector, including Melbourne Water.

Upon completing a multi-disciplinary degree that included geology and meteorology, Ms Smith was awarded a scholarship to study opera. She worked as a professional singer whilst progressing a career in taxation, working across UK and Australian Governments.

The Top 50 Public Sector Women 2020 were chosen from a nomination process from different organisations across the public sector, including government departments, local governments and statutory authorities.