Yarra Valley Water encountered numerous challenges during the installation of a $40 million project that will shift the suburb of Donvale from the use of aging septic tanks to a modern sewerage system. To tackle the challenging ground conditions and the major impact it would cause to customers, Yarra Valley Water had to rethink its approach and come up with new sewer designs that, where possible, moved the sewer alignment out of customers’ properties and into the nearby road reserve.

A new reticulated sewer system in Donvale will help around 1200 local properties disconnect from aging septic tanks. A four kilometre long sewer pipeline, predominantly along the Mullum Mullum Creek, will form the backbone of the new sewerage network.

In one such case, a 470m long section of the Donvale Branch Sewer was to pass through four separate properties. The proposed construction method involved creating large and sometimes deep shafts excavated in each of these properties and in close proximity to the houses. In some cases, these excavations would have been as close as nine metres from the edge of the house.

During the early stages of the project, challenging ground conditions made it clear that the initial design of the 470m section of the sewer would be risky to construct, and would represent a big impact to customers and their properties.

Variable ground conditions are generally more likely to occur along watercourses and if encountered, can increase the risk of things going wrong when using trenchless construction techniques, especially the risk of boring equipment becoming jammed underground.

Back to the drawing board

An alternative pipeline alignment that moved the section of the sewer within nearby Oban Road was adopted.

“Taking the opportunity to further refine our sewer design was an example of our commitment to truly put our customers at the centre of our business and understand the impact our actions and decisions can have on our customers,” Project Manager at Yarra Valley Water, Dean Anderson, said.

The new alignment offered Yarra Valley Water the ability to utilise Horizontal Directional Drilling (HDD) instead of microtunnelling, which had initially been considered for this section.

“Constructing a new sewerage network in an existing suburb can be very challenging. We greatly value the support we’ve received from our contract partners in delivering the Donvale Sewerage Project in a way which represents the least impact to the community and to the local environment,” Mr Anderson said. 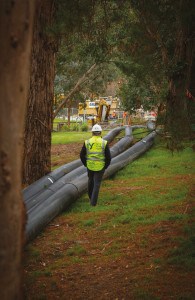 HDD allowed for the construction of a 470m long section in one go from a single location, whereas the microtunnelling method would have limited the construction to only 100m sections at a time.

HDD also removed the need to create large shafts within each of the four properties which meant customers’ properties would no longer be directly impacted by the installation. Three sewer maintenance holes were also taken out of nearby properties and shifted to the road reserve. This means access to the properties is no longer needed to perform sewer maintenance, reducing any future impacts even further.

As well as addressing the impact to customers, the new design also reduced impact to the surrounding environment. A tree near one of the initially proposed shafts is home to a particular species of owl known as the Powerful Owl which is listed as “threatened” under the Victorian Flora and Fauna Guarantee Act (1988).

Excavating shafts and operating boring equipment directly under the tree as was first proposed was likely to have impacted the owl and possibly resulted in the loss of the tree as well. The new design eliminated the need to put the habitat at risk.

The section of the sewer along Oban Road is now complete with minimal disruption to road users. Construction of the sewer project began in November 2015 and is expected to be progressively completed by the middle of 2019.