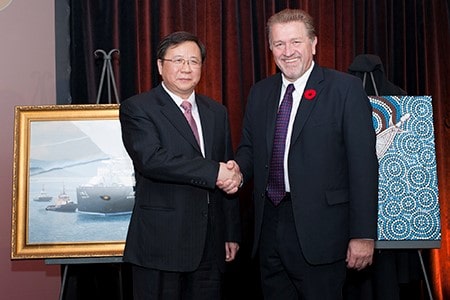 BG Group has completed transactions with China National Offshore Oil Corporation (CNOOC) for the sale of additional interests in the Queensland Curtis LNG (QCLNG) project. The deal went through for approximately $1.93 billion USD. Under a separate agreement, BG Group will also supply CNOOC with an additional 5 million tonnes per annum of liquefied natural gas (LNG).

Completion of the deal followed approvals from government, regulatory and other relevant authorities, and execution of related documents.

At the completion ceremony in Brisbane, BG Group Chief Executive Chris Finlayson said: “While today marks the completion of the agreements with CNOOC, it also signals the start of a new chapter in our partnership as we begin commissioning of the world’s first coal seam gas to LNG project ahead of first commercial cargo in 2014.

“Our relationship with CNOOC has grown as they increase their investment in our QCLNG project and BG Group becomes the largest supplier of LNG to the world’s fastest growing energy market.

“Today’s agreements exemplify our strategy to manage our portfolio more actively, monetise assets at different stages in their lifecycle and bring in key partners to accelerate value delivery.

“I would also note that, importantly, the total funds received from the transaction improve our gearing by five percentage points.”

The key terms of the transactions are unchanged from those set out in the heads of agreement announced on 31 October 2012, and reiterated at the signing of binding agreements on 6 May 2013: