Ramping up the rollout The National Broad band Network rollout is undergoing a period of acceleration, following a series of milestones including the release of the nbn’s fibre-­to-­the-­node connection product, revised contractor agreements and campaigns to expand the workforce. Meanwhile, nbn continues to progress its product roadmap, with long-term commercial satellite and HFC connection options next to join the multi-technology mix.

Breaking down the numbers

According to nbn statistics, 2015 was the rollout’s biggest year to date, with more premises passed by the network and more services activated than in any previous year.

Around 844,148 of the RFS premises were passed during the 2015 calendar year, a substantially higher number than in previous years (Table 1). Similarly, 413,661 premises were activated during 2015, more than doubling the number of activated premises overall (Table 2).

Across Australia, nbn contractors have been connecting premises to high­-speed broadband using a growing range of technologies.

So far, the commercial rollout options include the fixed line technologies fibre­-to-­the-­premises (FttP), fibre-­to­the­-node (FttN) and fibre­-to­-the-­basement/building (FttB); as well as coverage via fixed wireless.

Additionally, 48,000 premises are covered by interim satellite services and a number of premises in different areas have been involved in trials for other connection technologies (such as hybrid fibre coaxial connections) or technology variants (such as fibre-­to-the­-distribution point, Fttdp –a variation of FttN).

Each currently available connection product is deployed according to nbn’s multi-­technology rollout principles. These principles aim to ensure the use of the technologies that are least costly and can be deployed the most quickly to each area, while still being capable of providing download speeds of at least 25 megabits per second.

According to nbn, the switch to a multi­-technology mix (MTM) rollout model has played a vital role in the project gaining momentum. However, the majority of RFS and activated premises by the end of 2015 were still connected via FttP. 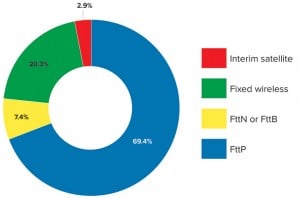 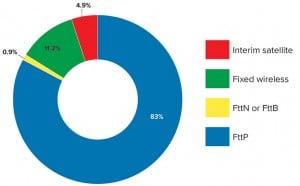 The nbn data does not distinguish between FttB (launched in late March 2015) and FttN (launched in September 2015), meaning the relative percentage breakdowns of the two connection types are unclear. Alleged leaked internal documents suggest that the FttN rollout fell behind schedule, primarily due to delays connecting power supplies to nodes, material shortages and completion reviews, and that, as a result, the majority of these connections were FttB.

However, at a hearing in March, nbn CEO Bill Morrow told the Senate Select Committee that the issues have since been resolved and the rollout is still on track to meet its yearly targets. 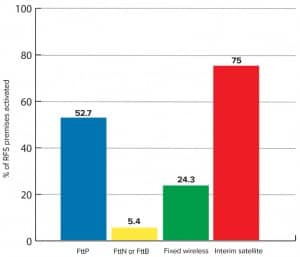 nbn’s most recent half­-yearly progress report provides a number of insights into the different technologies currently involved in the MTM rollout and the role each plays in the composition of the network so far.

According to nbn, the 12­week rolling average for FttN and FttB RFS is now at 8,000 per week, and continues to accelerate with more than 600,000 premises in construction, and nearly 1.3 million in design. The company aims to have 500,000 premises RFS by the end of FY16.

While critics of the MTM rollout have criticised the potential costs of nbn remediating damaged sections of the copper access network for FttN connections, the company states that these costs have been factored into the budget and that the network conditions are generally falling in line with expectations.

The cost of deployment

The cost of connecting a premise to the network varies depending on the technology used, and, in the case of FttP, whether the premise is located in a new development (greenfield) or already established area (brownfield). The average costs of each connection type, as of the end of 2015, are compared in Table 3.

These costs should be viewed with an understanding that nbn undertakes a continuous process of trialling different technologies and product variations, in order to identify ways to reduce costs and accelerate the rollout.

Rollout costs can also be affected by unexpected circumstances. Therefore, the costs of deploying different connection types are subject to change.

For instance, the company recently trialled a cheaper FttP build using thinner optical fibre, which has the potential to greatly reduce the cost of deploying fibre network components.

There is also the potential for new connection types or variants to be incorporated into the rollout as new technology becomes available and its cost falls.

For example, nbn intends to undertake larger scale trials of an Fttdp product variant, where the fibre optic component of the network terminates at a smaller node (serving two to six premises), at the last possible junction point.

The Fttdp node also has the benefit of being powered from the customer’s premises rather than needing a separate power source. The recently trialled thinner, cheaper type of optical fibre will also be incorporated into the trial connections.

The trials, which began in April, will run for three months and are expected to connect around 20­30 homes of nbn staff in Sydney and Melbourne. Currently, nbn expects that a commercial Fttdp product may become available some time in 2017.

Initially, nbn primarily intends to use Fttdp to serve premises that are located too far from the existing power infrastructure required to power an FttN node and are unsuitable for other, cheaper connection types.

There are suggestions that this product, which can achieve superior upload and download speeds to FttN, may eventually replace sections of the rollout of FttN in areas where design and construction have not already begun by the time it becomes commercially available.

“This has opened so many more opportunities,” said Mr Morrow. “We see a couple of hundred thousand homes that would otherwise be getting FttN or fixed wireless that this now has passed over and broken over into the faster, cheaper driver that we have.”

In response to suggestions that the superior speeds achievable on Fttdp and respective costs of deploying Fttdp and FttN (with Fttdp estimated to cost around $400 more per connection on average) mean that Fttdp should replace the FttN rollout completely, Mr Morrow stated that the technology “is just not quite there” and is yet to be the quickest and cheapest option for the majority of premises.

NBN CFO Stephen Rue said the switch from FttN to Fttdp had been considered, but the cost of changing the type of technology deployed in areas where FttN design or construction had already progressed would be too costly and cause delays in the rollout.

Next on the agenda

In recent months, nbn has been completing final trials and demonstrations leading up to the company’s next major product releases – its commercial hybrid fibre coaxial (HFC) connection product and its long­term satellite service.

nbn successfully completed its HFC pilot in Redcliffe, Queensland. This pilot began in November 2015, and involved building out the network to 4,500 premises on the Optus HFC network and activating test connections to around 20 premises from three different retail service providers (RSPs) – Telstra, iiNet and Exetel. During the trial period, end users received speeds of up to 100Mbps download and 40Mbps upload, averaging at 84/33Mbps.

This places the upload speeds of nbn’s HFC service among the fastest in the global market. The company now expects to launch commercial HFC services in June 2016.

Throughout the pilot, the end user experience was measured by eMetric boxes. These devices connect to the RSP’s gateway/router through an Ethernet cable plugged into the network port, and automatically measure and report on network performance.

This device can discretely test for features such as network performance (download and upload speeds) and network latency.

Independent telecommunications research firm Ovum was recruited to verify the pilot results. According to Ovum, the tests provided a ‘good (if not conservative) overall view of average speeds’ despite the placement of the eMetric devices (in parallel with the end user gateway) – meaning the eMetric devices competed with the end users’ devices for bandwidth, which may have reduced the speeds achieved throughout the trial, especially at peak times.

While the speeds achieved throughout the trial provide some indication of the upload and download speeds HFC connections are capable of achieving, additional factors must be taken into account for a full commercial HFC rollout.

For instance, in HFC networks, all premises served by a fibre­optic node share the bandwidth of that node. This means that there exists a maximum number of premises which can be served by one node while still delivering high speeds.

Additionally, factors such as the condition of the existing HFC network and whether any remediation of the cable is required can affect the cost and speed of HFC deployment.

However, nbn states that it is confident it can translate its proposed HFC broadband speeds across its HFC network through a number of initiatives. These include:

In June, contractors will begin rolling out commercial HFC connections. The first premises connected are expected to be in Redcliffe, where the pilot took place. nbn has been working towards finalising contracts with Telstra and Optus for HFC engineering, procurement and construction management since December 2015.

Blasting off with sky muster

The commercial launch of nbn’s Sky Muster satellite service is expected to occur in late April to early May 2016, after a successful demonstration at the ENEX Test Lab in Brunswick, Victoria.

During the demonstration, Sky Muster delivered Layer­3 speeds of 25Mbps download and 4Mbps upload – just short of the maximum 25/5Mbps wholesale speeds that will be available on the service.

End user trials involving around 200 premises in regional Victoria are now being undertaken to conduct further testing of the service ahead of the full commercial launch.

The first commercial satellite, Sky Muster, launched into orbit in October 2015, and the second satellite is expected to join it in the second half of 2016.

Successfully launching the new HFC and satellite connection products will be vital for nbn to meet its ambitious rollout target of connecting eight million premises to the network by 2020.

Additionally, nbn aims to have approximately 2,632,000 premises RFS and approximately 955,000 activated around Australia by the end of the 2016 financial year.

Those within the industry will watch the nbn with interest over the coming months, to examine the impact of the new connection products on the rollout’s progress.

There will also be interest around whether the company can build on 2015’s results and meet its yearly rollout and budget targets, despite doubts expressed by media and industry sources.

The findings of the company’s Fttdp trials and its subsequent decisions about incorporating of the MTM and Australia’s broadband.