As the impacts of climate change worsen and put Australia’s energy future under the microscope, renewables are set to play a significant part in the country’s pathway to a low-emissions future. Utility has collated Australia’s most ambitious renewable projects across batteries, bioenergy, solar, wind and hydro, to reveal how the country is making the most of its abundant resources.

As the effects of climate change start to unfold in real-time, Australia is investing in the renewable energy industry.

The uptake has been driven by solar and wind, with rooftop solar growing a massive 25 per cent in 2019, and large-scale solar growing rapidly; contributing to two per cent of all generation in Australia.

According to a recent International Renewable Energy Agency (IRENA) report, Renewable Capacity Statistics 2021, Oceania’s renewable growth rate was the highest in the world, boasting a 18.5 per cent rise – in comparison, Europe had a six per cent rate and Asia 15 per cent.

Renewable energy uptake will play a significant role in the transition of the National Electricity Market (NEM) to creating sustainable, clean and reliable energy.

Big batteries are playing a crucial role in the transition to renewable energy, by acting as the ‘power banks’ of the energy world. Traditionally, coal, gas and hydro energy have provided the grid with stability, using frequency control and inertia.

Inertia is supplied by energy sources that have large rotating rotors, acting as a defence for service disruptions, because if the power source wanes, the rotor will keep spinning. However, as these types of energy suppliers reduce in the grid, so does the grid’s back-up storage.

Battery Energy Storage Systems (BESS) provide a backup supply for renewable energy sources, overcoming the problem of intermittent supply when it is not sunny or windy.

When conditions for renewables are ideal, BESS can store excess power created for use when conditions are not as good, or when service is in demand.

The Victorian Big Battery – a 300MW battery the size of a football field in Geelong – began in 2019 and is set to be one of the biggest batteries in the world.

The project is a collaboration between French renewables company Neoen and Tesla Megapack technology – a modular system that is high-density and designed for grid-scale commercial projects, allowing the project to be installed quickly.

The Tesla battery Megapacks are pre-assembled with battery modules, bi-directional inverters, a thermal management system, controls and an AC main breaker, in the one enclosure.

• 2021: Construction stage (estimated to take around ten months), received the battery equipment during May, June and into August, construction including building, testing accreditation, grid connection and storing and discharging electricity, with both 180 MVA 220/33kV transformers energised

• 30 July 2021: During initial testing a megapack caught fire, but the site was electrically isolated and emergency services called

• 2 August 2021: Megapack doors removed for temperature check and the site was declared under control. Investigators state that the cause was most likely a leak within a cooling system in a megapack

• End of 2021: (To be officially confirmed) operations to begin, estimated to be active for 20 or more years

The project aims to boost renewable capacity in Victoria, in line with the state’s targets of 40 per cent renewables by 2025 and 50 per cent by 2030.

The battery also acquired a grid-services contract with AEMO, unlocking 250MW peak capacity for the Victoria-NSW Interconnector, and partnering with AusNet, who will provide the connection for the battery.

Bioenergy, or energy from waste, is a form of renewable energy that generates energy from converting biomass into heat, biogas, liquid fuels and electricity.

Biomass resources are organic and come from forestry, agriculture or waste streams that are available on a renewable basis – the process often creating byproducts that can be used in other ways, such as biomass-based concrete. The waste-to-energy (WtE) project in Kwinana, an industrial hub located 40km south of Perth, is an emerging waste facility. The waste-to-energy project will use Keppel Seghers (the environmental technology arm of Keppel Corporation) moving grate technology to thermally treat waste and convert the energy recovered from the process into steam, producing electricity.

• 2018: The project received financial closure in October with Avertas Energy

• 2021: Project is moving into its critical stage of boiler water wall installation; prefabricated elements that contain water and steam piping to receive heat from the waste combustion process

The project will be the first waste-to-energy facility on a utility-scale in Australia, aiming to divert around 25 per cent of Perth’s rubbish (post-recycling) to landfill sites.

The waste-to-energy project is  aiming to export 36MW of energy to the local grid on a yearly basis, which could power 50,000 houses.

The project will avoid 400,000 tonnes of carbon dioxide being emitted yearly, similar to taking 85,000 cars off the road.

Solar energy is Australia’s most popular and well-known renewable power source as it is accessible and abundant. It is easy to think of solar as the country’s face of renewables.

Solar energy is a relatively simple process compared to other renewables; solar panels convert sunlight into direct current electricity and solar inverters convert this electricity to alternating current power. If a household or business has its own rooftop solar panels, it can run off this power, and even sell electricity to the grid.

The AAPowerLink will build the world’s largest solar farm and world’s biggest battery storage facility, located in the Northern Territory.

The AAPowerLink plans to deliver a 5,000km transmission system to not only supply Darwin with competitively priced renewable electricity, but Singapore and Asian markets as well.

Energy will be generated by a 14GW solar farm with 33GWh battery energy storage, located near Elliott, in the Northern Territory. Energy generated at this facility will be transmitted 800km to Darwin and then 4,200km via undersea high voltage direct current (HVDC) transmission networks to Singapore.

• August 2021: Proprietary optimisation software for the entire AAPowerLink system, including the Singapore and Darwin electricity markets is developed, 750km Australian section of the subsea survey is completed, and PwC as Project Advisory Partner is appointed

The AAPowerLink project is valued at over $30 billion, and will include 3,750km of HVDC submarine cables, 14,000 MW of solar arrays, 3GW of dispatchable electricity, and aims to supply up to 15 per cent of Singapore’s total electricity needs. 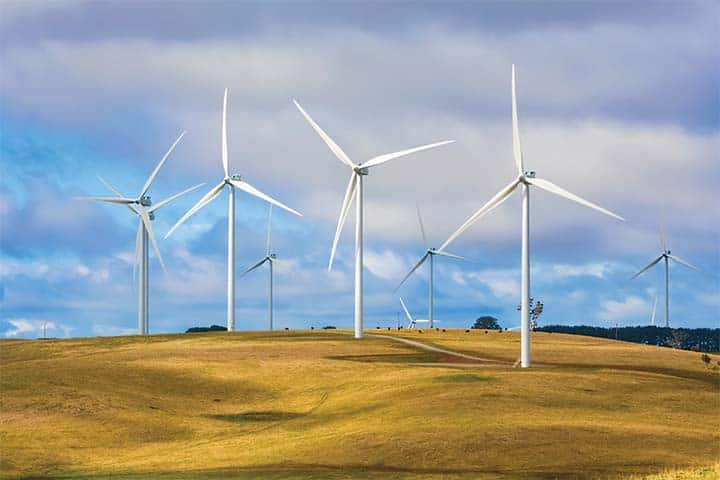 Alongside solar, wind is one of the most well-known sources of renewable energy, with the use of wind energy beginning in Australia in 1987.

Wind power is one of the cheapest forms of energy to produce, and now makes up eight per cent of all electricity generated in Australia (as of 2019) and 35 per cent of all renewable energy in the country, with the Australian Clean Energy Council (AEC) stating that there is approximately 6,279MW of installed wind power capacity in Australia.

The Federal Government has also recently passed new legislation, The Offshore Electricity Infrastructure Bill 2021, to establish a framework for the construction, operation, maintenance and decommissioning of offshore electricity transmission and generation projects.

The legislation is set to support a wave of investment in offshore electricity generation and transmission projects, including offshore wind farms – boosting opportunities for renewables.

Set to be the biggest wind farm ever built in NSW, Rye Park Wind Farm will be located near the small southern tablelands town of Rye Park, near Yass. The Tilt Renewables project reached financial close in August 2021 and will be located on a ridgeline positioned at a right angle to the prevailing wind, providing optimal wind conditions.

The farm will be connected to the NEM through Transgrid’s 330kV Yass to Gullen Range Line, by building a new 330kV connecting substation.

• December 2020: Tilt Renewables announces that the offtake agreement with Newcrest Mining for the supply of electricity and green products for a 15 year period from the Rye Park Wind Farm, has been finalised

• 2023: Operational (to be officially confirmed)

The project will create around 250 jobs during construction and a further ten long-term jobs during operation, with plans to be operational not long after the Liddell Power Station closes in 2023, according to Tilt Renewables Chief Executive Officer, Geoff Dutaillis.

Hydropower, or hydroelectric power, is one of the oldest forms of renewable energy, using the natural flow of water and converting this movement into electricity.

Hydropower has been used for thousands of years, typically using the techniques of hydroelectricity and Pumped Hydro Energy Storage (PHES) for generation and storage.

Hydroelectricity typically involves reservoirs or dams, where water can pass through a generator, called a turbine, setting the blades into motion and turning this motion into energy.

PHES can store large amounts of electricity for a long time, and focuses on storage of energy and reliability for consumers. It does this by using excess energy, possibly from a renewable source such as wind, to pump water from lower dams to higher ones, storing energy in the upper reservoir (much like a battery).

This energy can then be released, creating hydroelectricity at any time, which is critical to ensure power reliability and avoiding blackouts.

Snowy 2.0 is a pumped hydro expansion of the original Snowy Scheme, completed in 1974, and the largest committed renewable energy project in Australia.

Located on the Snowy Mountain Scheme in NSW, in the Kosciuszko National Park, the 2,000MW expansion will link the two existing dams on the mountain; Tantangara and Talbingo, with 27km of tunnels, whilst also building an underground power station one kilometre beneath the mountains.

The new power station has turbines that are reversible, meaning that the water can be pumped back to the top dam, reusing it to create reliable clean energy on-demand.

This is especially important as solar and wind electricity increases and large scale storage, like Snowy 2.0 will be required. The project will supply 350,000MW hours of large-scale storage, enough to power 500,000 homes at once and be able to deliver electricity to the grid within ninety seconds.

• 2026: Project expected to be completed

The project is partly funded by the Federal Government, who have committed $1.38 billion, with Snowy Hydro to fund the remaining. Snowy 2.0 aims to help Australia convert its grid to low-emission and renewable energy, whilst creating reliable energy for major cities Melbourne and Sydney.

Ambitious projects like Snowy 2.0, show what Australia’s future of embracing renewable energy can look like, providing a solution to one of the biggest hurdles the country has faced when reducing coal energy in the grid; reliability.

These projects will ensure that the country’s future low-emission grid has enough storage to support Australia through any disruptions and adverse weather events.

With Australia boasting some of the largest renewable projects in the world,  and the potential for offshore renewable generation given the go-ahead, the country’s renewables future is bright.