The Bureau of Meteorology has released its annual report on the performance of Australia’s water organisations which recognised SA Water’s positive outcomes in water network management and customer service, as well as some other areas with room to improve.

The report shows SA Water performed favourably amongst its peers – the larger utilities with 100,000 or more customers – particularly with a reduction in the number of water main leaks and breaks, from 15 per 100km of main in 2018-19 to 13.5 last financial year, which is far lower than the national average of 22.3.

This positive result continued to be reflected in SA Water’s own reporting for the last calendar year, with a 12 per cent reduction in the number of water main incidents compared to 2019. The decrease is typical of more favourable weather conditions and buoyed by continued strong investment by SA Water in water main management. 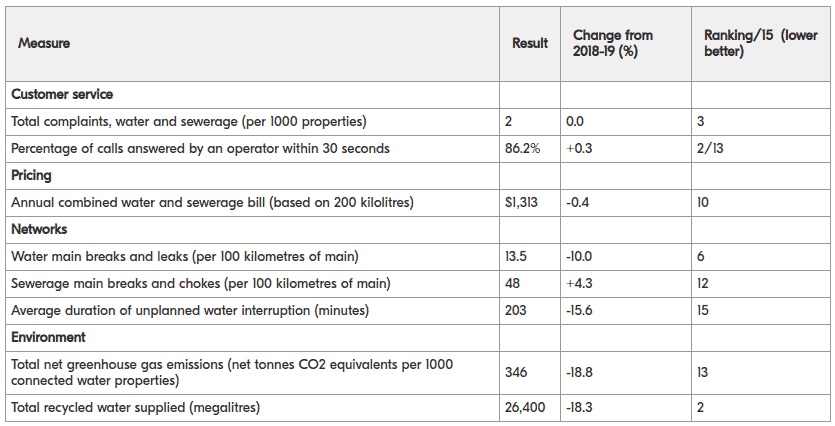 The utility also saw a decrease in the annual combined water and sewerage bill, with a further improved result expected in the 2020-21 NPR, taking into consideration the price reductions delivered to customers from 1 July 2020.

Additionally, SA Water’s General Manager of Strategy, Engagement and Innovation, Anna Jackson, said it was pleasing to be among the major water utilities receiving the least customer complaints, with two per 1,000 properties in 2019-20.

“We pride ourselves in delivering outcomes which meet our customers’ needs, including ensuring they continue to receive safe and reliable water and sewer services,” Ms Jackson said.

“When a fault or incident occurs that prevents this from being achieved, we still want to be able to support those affected and put actions in place to reduce the potential for it to happen again.

“One area where we are continually looking to improve is unplanned water outages.

“Although the average duration for a water supply disruption in our network was down nearly 16 per cent compared to the previous year, we want to do better.

“Another highlight for us in 2019-20, was attaining the highest percentage decrease in greenhouse gas emissions, at nearly 19 per cent.

“In working towards a zero cost energy future, we aim to reduce CO2 emissions by more than 89,000 tonnes per year, primarily through increased use of renewable energy to sustainably reduce both our environmental impact and operational expenses.”

Across the country, there was an increased reliance on desalination to supply water to major urban centres, with all capital cities operating desalination plants reporting a significant increase in production compared to 2018-19.

While desalination always forms an important part of SA Water’s drinking water supply mix, the main driver behind the significant increase in 2019-20 was the Adelaide Desalination Plant’s 40 gigalitre contribution to the State and Federal Government’s national drought relief measure.