Rob Carr finishes strong on its largest project to date Green Square is one of the City of Sydney’s key urban renewal precincts, which is in the process of being transformed from old industrial land into a major new residential, retail and cultural hub. By 2030, the broader Green Square Urban Renewal Area is expected to accommodate approximately 61,000 residents and 22,000 workers.

The Green Square town centre is located on a floodplain known as the Waterloo Swamp, and the new two kilometre stormwater drain is needed to reduce hazardous flooding in and around the town centre and enable further development.

The project is in its final stages, and being delivered by the Drying Green Alliance (comprising client partners Sydney Water and City of Sydney with UGL Engineering, Parsons Brinkerhoff,
RPS Manidis Roberts and Seymour Whyte Constructions).

Rob Carr, as a related party entity to sister company Seymour Whyte Constructions, worked closely with the Alliance partners in 2014 during the Expression of Interest and Target Outturn Cost stages to submit a competitive bid for the project.

Rob Carr Construction Manager, Iain Lamb, said the company was heavily involved in the detailed design phase for both the stormwater pipelines and box culverts.

Following the successful tender process, the Drying Green Alliance was given preferred status in December 2014.

The Alliance team mobilised the following month with the Project Alliance Agreement executed in mid-February 2015.

The Rob Carr team mobilised in April 2015 and by the time they completed the work in mid 2017, their scope of works had extended to include:

For 20 months, the Rob Carr team worked to install DN1800 concrete drainage pipeline via microtunnelling in twin and triple parallel formation over a 1.3km section through poor subsurface ground, which consisted of fill and loose wet sand.

“Our team performed well under pressure. Whenever we came up against an unexpected challenge, our team would always come up with a Plan B to pull together and solve the issue.”

Mr Madden highlighted a recent incident where a tunnel boring machine (TBM) was blocked due to buried steel objects and could not proceed further.

“To complete the work, our team sank 7.3m shoring boxes down to six metres and drove sheet piles outside the shoring box panels to project downward between the new and existing previously tunnelled line,” Mr Madden said.

“This enabled the removal of the obstruction, which in this particular case was a section of steel plate buried in sand six metres deep. Following this, the TBM was retrieved and re-launched from the opposite end to complete the line.

“This was typical of the type of obstructions that were encountered along the alignment—there could be 200m of clean natural sand, then in one localised position a buried object would prevent the TBM from continuing. Unfortunately, this is impossible to predict even with the most detailed geotechnical information.”

To facilitate the trenchless pipeline installation, Rob Carr Pty Ltd self-performed the construction of five in situ concrete caissons between 10m and 12m in diameter in critical locations as well as eight other conventionally constructed shafts. This allowed for tunnelling equipment access and recovery, and enabled the team to construct other key complex drainage infrastructure.

With the range of multi-disciplinary work and extended scope of works that Rob Carr had to self-perform, Construction Manager, Iain Lamb, said the team increased to more than 50 employees at peak of construction.

“To ensure we had the right resources to carry out the works efficiently and safely, we invested time in recruiting quality new personnel to supplement our existing experienced team.”

Through good leadership on the ground by the experienced team members, Rob Carr was able to integrate the new members of the workforce while adhering to the highest safety and quality standards at all times. 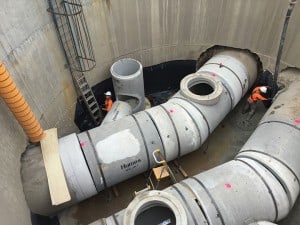 Project Manager, Darren Madden, said that although time and production schedules were tough, safety remained the top priority for the team.

“Our team takes a proactive approach to safety, and we look to eliminate risk or engineer a solution to reduce risk. A recent example involved planning for the lifting of roof beams for a 6m x 6m cast in-situ pit, it was highlighted that it would introduce a working at heights risk for the person removing the chains after the lift,” Mr Madden said.

“Our Supervisor Damian Coward devised the solution of installing handrails on the precast beams prior to lifting them to eliminate the risk of working at heights.”

“This project has showcased Rob Carr’s ability to step up and face challenges head-on to produce successful results. I commend every one of our project team—from workers to supervisors and managers—for their perseverance on this complex project,” Mr Soumboulidis said.

“The team had to contend with difficult ground conditions, brownfields sites full of buried man-made objects in the fill ground, time pressures and multiple constrained project sites, often next to live traffic or other works.

“Yet with all of this, the team never gave up and work was completed on budget and on time.”

In October 2017, Rob Carr and the Seymour Whyte Group joined VINCI—a global player in concessions and construction that employs more than 183,000 people in some 100 countries. As part of VINCI, Rob Carr will have access to international expertise and innovations that will enhance our in-depth local knowledge.

This partner content is brought to you by Rob Carr. For more information, visit www.robcarr.com.au.