Water Corporation maintains two underground pipeline tunnels in the Perth Hills – the 5.6km Canning Tunnel and the 3.9km Wungong Dam Tunnel. Inspecting these rock-lined tunnels is an important task that historically has been undertaken by work crews, but robotic vehicles are helping reduce the safety risks for workers.

An assessment involves various tests and samples or remedial work when needed, presenting some risks for entry crews. Typically, crews would make visual inspections using torches and often with limited outside communication.

A team led by Water Corporation Senior Engineer ROV Design, Daniel Rechichi, has developed a robotic crawler that can conduct a complete visual assessment prior to any crews entering the tunnel, including the ability to identify potential rock falls and other safety-related issues.

In addition to allowing remote inspection, the new vehicle also supports crews tasked with regular tunnel maintenance. Mr. Rechichi said that initial remote inspections allow images from inside the tunnel to be streamed in real time to crews outside.

“This helps identify potential safety risks, such as rock falls or areas where the rock face might be compromised, before crews enter the tunnel,” Mr. Rechichi said.

“The remote crawler has panning cameras which allow for a precise visual analysis. It also features a 360-degree camera, providing a virtual reality perspective in real time.

“Through the use of robotic vehicles, we’re hoping to conduct a planned inspection later this year entirely remotely and without crews needing to enter the tunnel.

“The other benefit of using remote vehicles is that when crews are required to enter the tunnel for maintenance, the robotic crawler provides portable power, light, and communications. This allows us to maintain audio-visual contact with our people at all times, increasing safety and efficiency.”

A powerful partner for field crews

Mr. Rechichi said that the crawler is unique from other Water Corporation assets due to its size and power.

“It weighs about 3,500kg and carries a 35kWh battery bank, giving it a total driving range of more than 10km.

“The vehicle is four-wheel drive and can be driven as a skid-steer or articulated depending on the mode selected. It has a hydraulic steering system, a front-end blade for clearing obstructions and hydraulic power take-off for hydraulic tools such as diamond core drills, high pressure water pumps, dewatering pumps and direct current welders.

“It has eight fixed cameras, a pan-tilt-zoom camera and communications links enabling connection of virtual reality cameras or LIDAR (light detection and ranging) units if required.

“The vehicle is controlled either by an outside operator via a towed-fibre optic umbilical or a local operator using a wireless hand controller.

“It is currently set up to work in situations where water levels are lower than 600mm, but is designed to be easily upgraded to work fully submerged.” 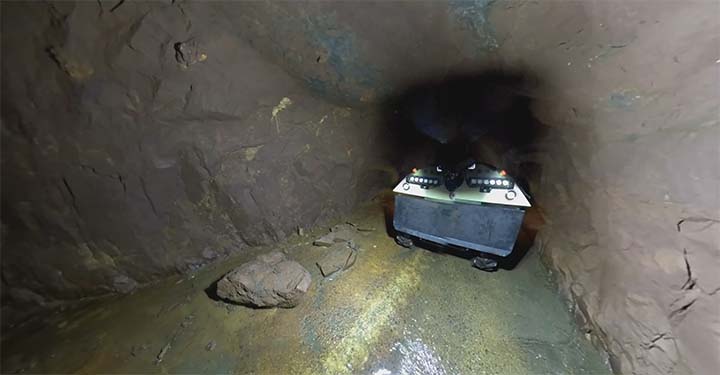 Water Corporation’s engineering team worked on this project on and off for about three years, between 2016 and 2019. Approximately one year of full-time work was devoted to the project.

The task of deploying the machine required a larger crew of Water Corporation ROV operators to isolate the asset and deploy the machine.

The crawler was used to inspect 3km of the Canning Tunnel in late 2019. It traversed this section several times and assisted entry crews by providing communications and power for concrete core sampling and rock bolt testing.

Another entry is scheduled for late 2020 from the opposite end of the tunnel, with crews only needing to enter the tunnel if maintenance is required.

“Some assets, such as tunnels, require regular inspection and maintenance, which can pose a challenge due to the confined nature of the space crews are operating in.

Remote vehicles are a perfect solution, allowing work to be undertaken effectively while, most importantly, protecting the safety of our people.”