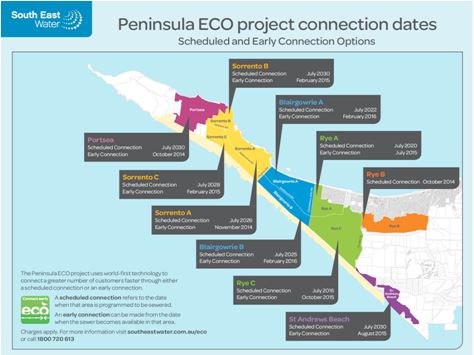 Construction has begun on a new reticulated sewerage system on the Southern Peninsula of Victoria.

The project will connect one of the last major unsewered areas in Melbourne’s south east to a reticulated system.

Doors will also open at the new Peninsula ECO sewerage connection shop on Point Nepean Road in Rye where residents across the southern peninsula can drop in and find out how they can make the switch from their household septic tank to the new reticulated sewerage system. They can also sign up for an Early Connection Option (ECO), which in some cases can fast-track their connection by up to 16 years.

“We’ve developed new technology that will fast-track the project and provide customers with an ECO as well as the scheduled rollout,” said General Manager Asset Creation Charlie Littlefair.

“By taking an ECO, customers can connect to the sewerage network up to 16 years earlier than through the scheduled rollout. This will enable customers to take advantage of the benefits of a sewer connection sooner – such as enhancing the value of their property through development.

“Due to the size of the project, with approximately 230 kilometres of pipe being installed in an accelerated timeframe of 30 months, it has been divided into 10 stages. We’ll commence works in Portsea in mid- November and in Rye in late January 2014 – with works ultimately meeting up in Blairgowrie.

“We’ll be working hard to keep construction impacts at a minimum – and thank residents and businesses for their patience during these important works.

“While the shop will be open throughout summer to register your interest in an ECO, construction crews will take a break during the busy late December to late January period. Construction of the main sewerage transfer pipe that connects to the Boneo Water Recycling Plant will resume in early 2014,” concluded Mr Littlefair.