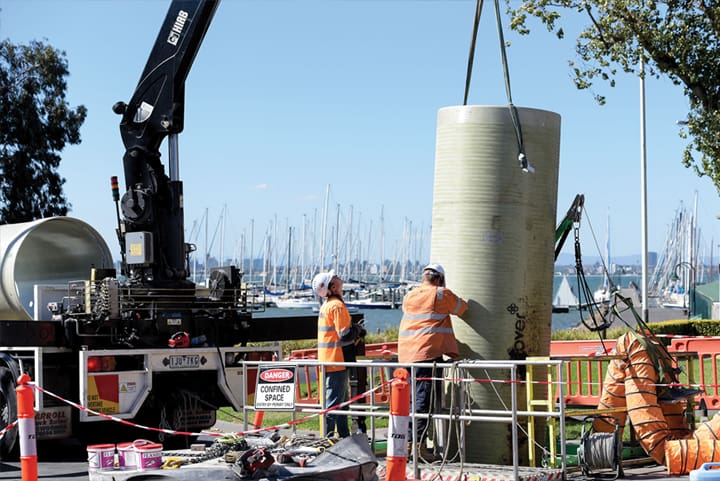 Melbourne Water has recently upgraded its existing 100-year-old 4.4km long Williamstown Main Sewer from Pasco Street in Williamstown to Scienceworks in Spotswood. This refurbished sewer will continue to benefit the communities of Williamstown, Newport and Spotswood by providing a reliable sewerage service for years to come.

The Williamstown Main Sewer Rehabilitation Project commenced in March 2017 and aimed to reline the brick-lined sewer while maintaining service to customers in the surrounding area.

Inspections of the Williamstown Main Sewer revealed it was in poor condition and needed to be upgraded.

Melbourne Water conducts regular inspections of its sewer network by using closed-circuit television (CCTV) inside the sewer and analysing the footage to determine asset condition. The regularity of these inspections depends on the risk of the asset, which is a combination of consequence of failure and likelihood of failure.

The project has improved the condition of the sewer by rehabilitating the existing sewer pipe and associated manholes.

“Our sewers were first built in the 1890s and the network has expanded over time to cover a larger area. Many of these older sewers are now in need of an upgrade to ensure they continue to service Melburnians.

“By rehabilitating and relining these aging sewers, Melbourne Water is securing a reliable and effective sewer service for our customers while also protecting the environment by reducing the risk of a sewage spill, which could make its way into Melbourne’s waterways.”

Along with relining the sewer line, all 35 manholes have been lined and rehabilitated, and new manhole lids have been installed on the surface.

Work began on reinstating the affected areas as close as possible to pre-existing condition in November 2018 and should now be complete.

A number of trenchless methods were considered before selecting the slip-lining method, such as Cured in Place Pipe (CIPP) and Spiral Wound Pipe technologies. Spiral lining the sewer was quickly ruled out due to the liner being unable to take the shape of the host pipe, which featured ovoid geometry.

CIPP was considered an acceptable rehabilitation solution as it met Melbourne Water’s project requirements; however, slip-lining was perceived as a superior option for only a small increase in cost.

“Each of these methods are currently used on other Melbourne Water sewer relining projects, and spiral lining was used along an 800m circular section of the Williamstown Main Sewer. However, slip-lining was determined as the best rehabilitation solution for the remaining 3.6km of sewer as this methodology avoided the need to bypass pump the sewage in aboveground piping, which was considered a major risk to the project,” Mr O’Neil said.

“Constructing a new sewer to replace the aging Williamstown Main was never an option given the high capital cost and risks associated with community impact.”

Slip-lining has been used extensively in Australia; however, this project was the first of its kind to use a fully automated pipe jacking rig to install GRP pipe inside an existing live sewer. The machine was specifically designed for the Williamstown Main Sewer Project and after some initial teething problems, this machine proved an efficient and safe way of installing GRP pipe.

“The biggest challenge was aligning the jacking pipe to the previously pushed pipe. A heavy chain inside a hessian bag would be dropped on top of the pipe being jacked to push the leading face (spigot end) down. The lowered pipe tended to pitch up when lowered into position. A forward-facing camera located inside the jacking machine allowed the jacking operator to give commands to the person lowering the weighted chain thereby ensuring that proper alignment could be achieved,” Mr O’Neil said.

The benefits of automated slip-lining include:

Although the Williamstown Main Sewer Rehabilitation Project is now complete, Melbourne Water’s Sewer Relining Program — a broader program of works to rehabilitate six major sewers across Melbourne over the next three years — continues, with several projects nearing completion or about to commence.

Mr O’Neil said, “The method for sewer rehabilitation will continue to be assessed on a case-by-case basis with parameters such as sewage flows, sewer condition, size, shape and length dictating the preferred rehabilitation solution.”