Marnie Scobie from Power and Water has received finalist status at the Women in Resources NT awards. The win comes after her creation of a support and mentoring group for female electricians called the “Sparkettes.” 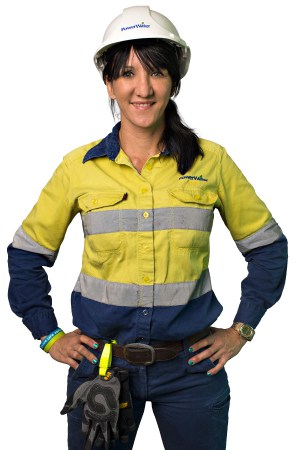 “I was very impressed with the Women in Resources event, the calibre of the other entrants and the winner of the overall award,” said Ms Scobie.

“The whole evening was very inspirational and I was honoured to represent Power and Water and to be considered among the incredible group of finalists.

“Women in Resources confirmed for me the importance of increasing our presence in events such as this, so seeing women working within the sector isn’t unusual, our presence is normalised.

“There were many exceptional women at the awards and I made numerous contacts on the night.

“In fact the whole experience has further motivated me to get more women into the trades in the resources sector.

“As part of that commitment, a colleague and I formed a support and mentoring group for female electrician called the Sparkettes after returning from the Women in Male Dominated Occupations and Industries conference in 2013, which is a group working to support women in trades in the Northern Territory.

“The Women in Resources award winners were amazing women and men with the gender diversity section won by Tim Hewitt who manages a whole crew of women at Newmont’s Tanami Operations and the overall winner, Leanora Wehrmann, began her career in Germany as a welder and speaks five languages,” Ms Scobie said.

Marnie Scobie is an Electrical Planner and Scheduler with the Substations group in Power and Water’s Power Networks team.