The rehabilitation restored a section of the sewer under Montgomery Park which was severely corroded and at risk of failing.

The rehabilitation was completed underground in two stages by Thiess Black and Veatch Joint Venture (TBVJV). The first stage involved relining a 230 metre section of the existing sewer, before two connecting sewer manholes were refurbished.

The liner was spirally wound into place at one of the manholes and sealed with structural epoxy. Cement was then pumped behind the liner to fill voids between it and the existing sewer.

This product and its specific installation provided the sewer with a continuous, strong, joint-free liner.

Project Manager, Jim O’Neill, said, “This was the first time Melbourne Water had used this Ribline product to repair a large, live sewer. We are really happy with the outcome.” 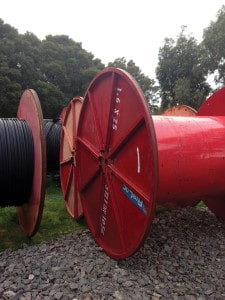 Empty reels at the construction site following the installation of Ribline.

The rehabilitation reduced the diameter of the sewer main from 1.8 meters to 1.6 metres but restored the structural integrity of this section of the sewer.

Stage two of the project involved removing the deteriorated concrete surfaces on the two connecting sewer manholes and applying a new protective coating.

The sewer relining and manhole refurbishment required contractors to work over 22 nights from July 2015 to ensure the safety of people working on the project.

“As there had been a long history of ongoing repair work on this sewer at this location, completing the work at night was always going to be a challenge,” Mr O’Neill said.

“Being mindful of the community was a high priority for everyone.”

Before construction began, TBVJV undertook a trial of the night work methods and procedures,  where workers trialled safe entry and exits into the confined spaces. Workers also looked for any potential restrictions on the use of the pipeline relining equipment.

TBVJV implemented a number of measures to reduce noise, light and odour for the community for the duration of the project.

The rehabilitation project was fully completed in November 2015.