Surviving a crisis: getting through when the worst case scenario hits All energy utilities have a plan in place for when any range of natural disasters hit, but what do you do when you’re facing a one-in-500 year event of unprecedented magnitude?

This was the challenge facing Energy Queensland after the devastating Townsville floods in February, and they share their insights into surviving and thriving after this event here.

The community of Townsville is still picking up the pieces after one of its worst natural disasters in living memory.

In February, North Queensland’s largest city was suffering from the effects of drought when an unprecedented monsoon event dumped a year’s worth of rain in just over a week.

While floods are part and parcel of a normal wet season in North Queensland, the relentless deluge took the community by surprise and tested the mettle of Energy Queensland’s Ergon Energy and Energex emergency response teams.

The Ross River snakes through the city and many densely-populated suburbs were in the firing line when it broke its banks, peaking at 42.99m, while the dam reached 244.8 per cent and the flow of water was 2000m3/second.

More than 3,300 homes and businesses were inundated during the record flood, along with critical infrastructure, including the power network operated by Ergon Energy.

At the peak of the one in 500-year event, more than 17,000 customers were without power, many of them de-energised for public safety reasons.

Energy Queensland’s Executive General Manager for Distribution, Paul Jordon, said community safety was at the heart of the response.

“Once we knew the city was facing the worst case scenario, we did everything in our power to protect the community, reduce the risk of damage to the electricity network that supports them and keep customers informed of impending outages.

“This involved invoking/enacting our flood plans, including pre-emptive de-energisation, dismantling and removing vital equipment such as switchgear and SCADA systems from substations in the firing line, and sandbagging equipment that couldn’t be readily shifted to higher ground.

“In a rapidly-evolving disaster, keeping an eye on the weather, working closely with emergency services and communicating with customers was critical.

“Through direct contact, traditional media and social media, we urged people in the flood zone to be prepared for protracted power interruptions and enact their household emergency plans, especially our life support customers.

“The frequent delivery of electrical safety messages to the community was also vital,” Mr Jordon said.

While the Ergon team is well-versed in disaster response, this highly unpredictable and protracted flood event required a different approach. 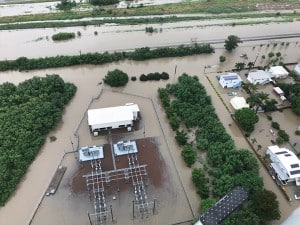 “When a storm or cyclone hits a region, our crews have a clear understanding of what type of damage to expect, and once the weather front moves on you can generally move troops in immediately to commence restoration,” Mr Jordon said.

“Floods are incredibly frustrating compared to a cyclone or super-cell storm, because the damage occurs slowly and you know that every litre of water entering each padmount, pillar box, substation and meter box is bringing with it debris, soil and silt.

“With around 50 per cent of Townsville’s flood-affected areas being supplied by an underground network, you know every piece of equipment will have to be methodically opened, cleaned, tested and repaired and dried before we can safely re-energise. You know the task ahead will be painstaking, and massive.”

Bring in the troops

With that in mind, Ergon mobilised troops from across the state, including reinforcements from South East Queensland-based sister company Energex, to support local crews in what would be an around-the-clock restoration effort.

Mr Jordon said bringing in additional crews to a disaster area is not about throwing as many people at the problem as possible. Given the nature of the event, it was important to consider the best skillsets required and actually getting resources into the area as soon as possible before access was completely cut.

“From a social perspective, you have to be aware that every person responding to a natural disaster, while undoubtedly carrying out an important task, must also have as minimal impact as possible on the limited resources, such as accommodation and food,” Mr Jordon explained.

“From an operational perspective, you have to have an extremely good understanding of what damage crews are likely to find, and only deploy staff with the specialised skills required to get the power back on. For example, knowing we were facing significant damage to the underground network, we needed to move additional staff with these skills into the region.

“At the same time, we were providing support to local team members who had been personally affected by the disaster, which obviously had a devastating impact on the community.”

While restoration crews were keen to get out and help get the community back on its feet, they were faced with a frustrating wait for floodwaters to recede.

“The problem with flooding on this scale is it takes time to subside and much of the damage is hidden under the water’s surface,” Mr Jordon said.

“It’s frustrating for crews who are ready to respond, but cannot begin inspecting the network until floodwaters recede and in this case it was days before the true extent of the damage was revealed.”

The view from above 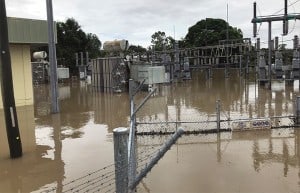 In the meantime, aerial inspections gave crews some insight into the challenges ahead. The Australian Army provided Ergon chopper flights, enabling crews to scope damage in areas that remained cut off because of floodwaters, debris and structural damage to a bridge.

Drones, which have become a vital weapon in Ergon Energy’s arsenal, were widely used to find faults amongst the devastation.

Mostly, fault-finding meant a hard slog on foot for crews in hot, humid and muddy conditions.

Mr Jordon said that once Ergon had a clearer picture of damage to the network, it was time to devise a meticulous restoration plan for the community.

“Planning is everything when it comes to natural disasters and there’s only so much you can do until you know the full extent of the damage.

“We had a good idea what to expect, but we needed the waters to fully subside to know exactly what would be required in terms of staffing, spares and equipment to enable us to devise an accurate restoration plan timeline,” he said.

Working towards a goal

Ergon set an ambitious restoration target: to have every property that was safe to re-energise back on the grid ten days after the peak of the flooding.

“The plan also included a street-by-street restoration timeline, which we released to the public via our website, social media and traditional media, and delivered to the Local Disaster Management Group,” Mr Jordon said.

“This detailed public plan gave everyone an idea of when power would be restored to their properties and allowed them to plan their lives around it. Ultimately, it gave the community a form of certainty in a very difficult time.”

The restoration plan also gave crews a goal and it wasn’t long before they were aiming to exceed the community’s expectations.

“Within hours of us going public with the document our crews said they wanted to achieve the goal a day earlier,” Mr Jordon said.

“Although we’d said we’d have power available to everyone by the Tuesday evening, crews had it restored on Monday afternoon.

“Their drive was nothing short of incredible and we could not have been any prouder of their efforts.”

Above all else, the meticulous planning, resourcing and restoration planning, combined with outstanding commitment from staff, saw this result achieved without a single recordable injury.

“They were inspired by the support of members of the community, who often greeted our crews with cold drinks and snacks as they worked in temperatures tipping 40 degrees with stifling humidity and often ankle-deep in mud,” Mr Jordon said.

In challenging conditions, Ergon and Energex crews ticked off an impressive to-do list:

It was a massive undertaking by crews, which went a long way to helping restore a sense of normality to a community in crisis.

From every disaster response, there are valuable lessons, and Paul Jordon observed a few keys at the heart of the success of the Townsville flood response. He said it was imperative to empower crews with ownership of the disaster response by ensuring they were safe, well-resourced, had clear work plans each morning and were kept informed of the holistic restoration process.

“Keeping the community and key stakeholders informed throughout the event also went a long way to quelling any angst about the power situation.

“Getting the restoration plan out early also gave customers the information they needed to get on with life, while at the same time rallying our crews with a goal.

“At the end of the day, we all want the same thing – the safe and timely restoration of power.”