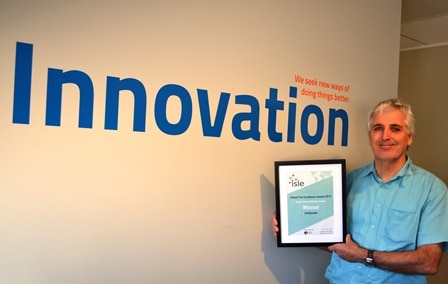 The winner of the Global Most Active TAG Member Award has been announced at the 100th TAG Innovation Forum held recently in Athens.

Unitywater has won the prestigious TAG award – given by the partnership between global consultancy Isle Utilities and water authorities from around the world to look at fast-tracking the adoption of new inventions and innovations to benefit the water industry.

Unitywater was up against seven other international authorities for the award at this year’s 100th forum, which was held in association with the 2015 Global Water Summit.

Judging was based on engaging with the TAG process, trialling new technologies, introducing companies to TAG and involvement in collaborative trials.

“Winning this award is a significant achievement for Unitywater and one we are very proud of,” said Unitywater’s Executive Manager Infrastructure Planning & Capital Delivery, Simon Taylor.

“This award is shared by staff working in many sections of the organisation, including infrastructure planners, engineers, field crew and treatment plant operators.

“It is a tribute to the willingness of the whole team to embrace the concept of thinking outside the square for the betterment of Unitywater’s operations as well as the water industry generally.”

Some examples of the innovations trialled by Unitywater include: