Melbourne Water has revealed the name of the tunnel boring machine (TBM) that will be powering underneath the Yarra River, replacing the century old Hawthorn Main Sewer.

The TBM that will play an integral role in the Hawthorn to Richmond Sewer project will be named after Olympian Victorian rower Lucy Stephan, who powered to gold at the Tokyo Olympics as part of Australia’s women’s fours rowing team.

The Hawthorn to Richmond Sewer project is being carried out by Melbourne Water in partnership with John Holland-KBR Joint Venture.

The TBM was named Lucy by Grade 1/2 pupils at Hawthorn West Primary School to celebrate Lucy Stephan’s achievements and contribution to the sport. 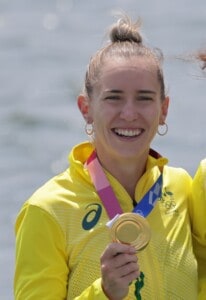 Lucy, who grew up in Nhill in country Victoria, was named 2019 Victorian Female Athlete of the Year and has been a regular feature rowing along the Yarra River for training.

Tradition dictates that a TBM is given a female name before it can start to tunnel, granting good luck for the project ahead.

The tradition dates from the 1500s when miners and military engineers using explosives for excavation prayed to Saint Barbara – the patron saint of tunnellers and miners.

Lucy joins such luminaries as former Victorian Premier Joan Kirner, Australian cricketer Meg Lanning and Bella Guerin, the first woman to graduate from university in Australia, in having TBM’s named after them.

The TBM ‘Collette’ that carried out a major upgrade to Melbourne Water’s O’Shannassy Reservoir in 2020, was named after Victoria’s Chief Engineer, Dr Collette Burke.