Innovative technology that has been proven to automatically restore power within one minute of a fault is now being further developed by United Energy to deal with more complex network issues.

Known as Fault Location, Isolation and Service Restoration (FLISR), the technology was developed by distribution service provider United Energy and has been in operation around 90 times since 2017, automatically restoring power to over 130,000 customers across south-east Melbourne and the Mornington Peninsula.

Robert Simpkin, Secondary Assets Manager at United Energy, said the system uses real-time information collected from field devices across the network to determine the location of the fault and then automatically switches the network to isolate the faulted section and restore power to customers in affected areas.

“Power is generally restored to customers in under a minute, with an average re-connection time of 43 seconds,” Mr Simpkin said.

“The speed with which we’re able to restore power following a fault, means that traffic lights, life support equipment and other critical services are up and running within seconds while in the meantime, our crews are able to formulate a plan of attack to resolve the remaining faulted section still out.”

A recent example of FLISR’s effectiveness was during a fault in the Donvale area, which initially affected 3,200 customers, but the impact was reduced to less than 270 customers within 30 seconds.

In another example, high winds on the Mornington Peninsula caused a tree branch to fall over powerlines. FLISR automatically restored power to 2,831 customers in 36 seconds. 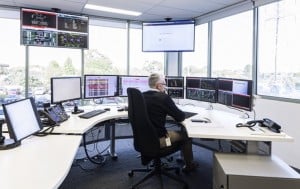 Following the success of the initial implementation in 2017, works are now underway to increase the number and complexity of network faults that FLISR can manage.

“We’re increasing the capability of FLISR to respond to more complex faults and this will improve performance by about 20 to 30 per cent, meaning the technology should operate for over 120 faults each year on average,” Mr Simpkin said.

“The improvement plan also includes increasing the number of remote-controlled field devices on the network, with an additional 80 to be rolled out in 2019 and early next year.

“The more devices we have on the network, the smaller the faulted section and therefore, more customers can be restored by FLISR.”

Mr Simpkin said the collaborative team is hoping to even further expand the capability of the system in coming years.

“We’re anticipating even more improvements to the technology in the future as we continue to ensure the reliability of the network, and the speedy and safe restoration of power to customers when faults do occur,” he said.

United Energy distributes electricity to around 685,000 customers – or more than 1.45 million Victorians – across Melbourne’s south eastern suburbs and the Mornington Peninsula. Electricity is distributed in the region via a network comprising over 13,300km of wires supported by more than 204,500 poles and associated infrastructure.