The challenges of remote monitoring of assets The fundamental challenges that hinder a water utility’s ability to monitor its assets are sparsity of infrastructure and inherent budget limitations. Many key functional devices in the treatment and distribution of both water and wastewater operate unsupervised. The outcome is a non proactive approach to asset health and fault event management.

For the utility, the result is felt in elevated maintenance costs, recurring plant failure replacements and frequent unwanted events such as overflow in the wastewater collection line. More broadly for the community, such breakdowns and events spell a significant impact to the state of the surrounding environment as well as the function of the water services they pay for.

The continued emergence of low power IoT solutions, such as LoRaWAN, into the industrial sector gives operational teams a new means of remote monitoring of assets that is both cost effective and highly scalable.

In recent years, Shoalhaven Water has developed a robust LoRaWAN architecture including a network of over 15 gateways covering the Local Government Area (LGA) from Berry in the North to Lake Tabourie in the South, as well as back-end data flows which include cloud access data analysis tools, such as Grafana and SCADA integration for real-time alarming.

A significant challenge for Shoalhaven Water is managing overflow events in the sewer collection network caused by blockages or ‘choking’ in the pipeline. Choking may occur in both ‘dry’ and ‘wet’ scenarios, meaning it may be caused by an accumulation of debris in the pipe or excessive infiltration of water into the system during rain events.

Of particular concern for Shoalhaven Water the coastal town of Culburra, whose protected bay hosts an important oyster growing trade.

The sewer line that runs adjacent to the bay is prone to overflow, particularly in periods of heavy rain. An overflow into the river system incurs a mandatory shutdown of the local industry for three weeks.

Additionally, such events are in breach of environmental regulations and naturally are of concern for the wellbeing of residents. The remote monitoring solution Shoalhaven Water employed is to hang a float switch in manholes of concern connected to a LoRaWAN device which relays data through a special antenna through the concrete lid of the manhole.

The attendant is notified when the water level in the manhole reaches the height of the float switch indicating that a blockage issue may have occurred. The monitoring method is simple and cost effective, totalling around $350 per site. Integration of IoT data into the SCADA network enables real-time alerting via SMS and email.

Shoalhaven Water is able to take a preventative, rather than reactive, approach to overflow management. Additional benefits – from an operational perspective – include the capability to network interactions between assets along the line, building a holistic understanding of wastewater collection. One of the more critical assets in freshwater distribution is Pressure Reducing Valves (PRV). To maintain reliability of supply for consumers, the consistent operation of these valves may now be upheld using remote technology.

By using LoRaWAN-based pressure logging devices that tap-off the water main, Shoalhaven Water can monitor the pressure fluctuations as well as differential pressure across the upstream and downstream sides of the valve. The data provides supplementary measurables that indicate asset health.

The key concept that the pressure logging project addresses is the ability for proactive maintenance in the event of deterioration of the valve or variation in the conditions of the supply to the valve.

The smart rubbish bins project is an initiative that is part of a broader council interest. Using ultrasonic distance sensors secured to the  underside of the bin lid, the level of rubbish in the bin is constantly monitored throughout the day. The level measurement enables data analysis of key statistics including frequency of filling and time-of-day usage.

Through remote monitoring technology, what was formerly an infeasible asset to monitor, now allows Shoalhaven Water to make informed decisions surrounding rubbish collection routing and problem areas. Thus, enhancing efficiency of the collection process and providing a cleaner environment for the community.

The LoRaWAN network is, by nature, only complimentary to Shoalhaven Water’s recently overhauled radio telemetry network, which remains the backbone of critical asset monitoring and control. 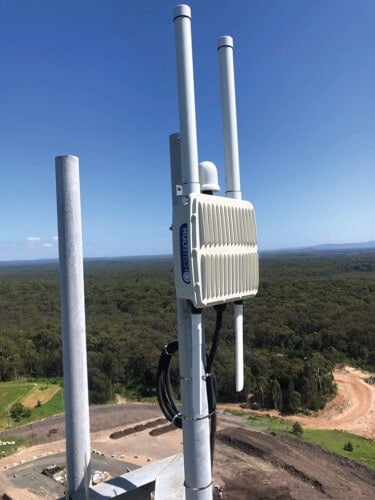 The batteries provide redundancy of power during fires for remote sites with low voltage plants, such as valve actuators. Fire deluge sprinkler systems are also being introduced to protect many treatment plants in the event of fire.

As Shoalhaven Water’s remote monitoring systems continue to build, several key challenges begin to arise, particularly in terms of operational reliability. LoRaWAN coverage is an ongoing challenge with the hilled terrain and dense bushland in the region.

Cyber security is fast becoming the major concern for IT in water utilities, and IoT networks are at the focal point in terms of how they fit into best practice. Providing an accessible and useful data interface for users is a developing issue that relies heavily on competent device management.

A primary challenge that many utilities will face in their IoT journey is the elongation of battery life and replacement planning as devices reach their end-of-life on a large scale.

The future focus for Shoalhaven Water is to expand current projects, in particular the sewer manhole network, enhance their LoRaWAN coverage through added gateways, further integrate IoT into broader IT cyber security strategies and improve device management and data flow through consultation and development of operational standards.