The end of an era: Louise Dudley reflects on leading urban utilities for the last decade 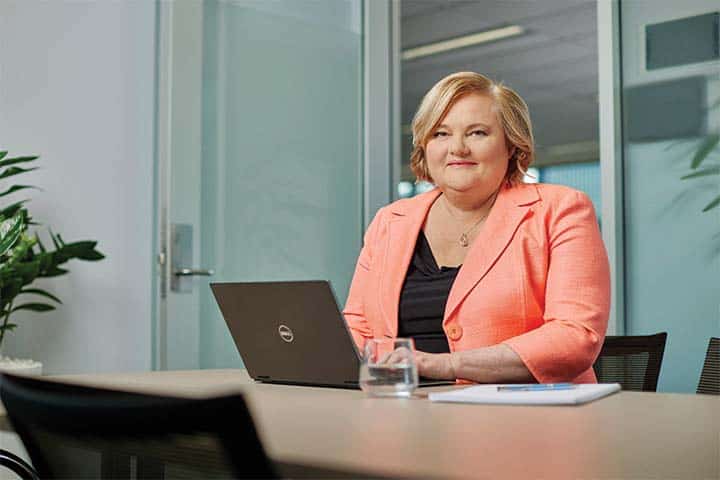 CEO of Urban Utilities, Louise Dudley, is finishing up her ten year tenure at the leading water utility in August, following her transformative stint at the helm. Utility talked to Ms Dudley about her role’s biggest challenges, encouraging women to enter the sector, championing inclusivity and the industry’s innovation evolution.

Ms Dudley is finishing her ten year long tenure at the helm of one of the nation’s largest water distributor-retailers and what has become, largely thanks to her guidance, a trailblazer in the Australian utility industry.

Urban Utilities delivers drinking water, recycled water and sewerage services to more than 1.4 million people in South East Queensland, with a large focus on sustainability and collaboration in the sector. Ms Dudley first entered the water industry in 2007, working for the Brisbane City Council’s retail water business in the role of Executive Manager.

“I was part of the team that facilitated Australia’s largest ever water sector transition and merger transaction, which ultimately resulted in
the formation of Urban Utilities. I took on the role of CFO and, two years later, was appointed CEO,” Ms Dudley said. “Fourteen years on, the industry is more innovative, sustainable and customer-centric than ever. It’s been a pleasure to be part of its evolution.”

Lessons learnt: it’s about the people, not the pipes

Ms Dudley said that, despite Urban Utilities undoubtedly being an infrastructure-heavy business, she has learnt that the real investment needs to be in people, “In a nutshell: it’s about the people, not the pipes”.

“They are the ones who are working together to deliver the outcomes for our customers and communities, and really determine the reputation of the business,” Ms Dudley said.

Ms Dudley said that during her time as CEO she found that a healthy and balanced workplace culture couldn’t be bought or cultivated overnight, but takes a huge amount of time and effort – and trial and error – to see results.

“It’s so important that each and every team member feels connected to our purpose (enriching the quality of life) and understands how their role contributes to our strategic direction and overall success.

“If people are purpose-driven and feel engaged, enabled and rewarded, they will do their best work and be more likely to go above and beyond to provide top quality products and services to our customers and communities,” Ms Dudley said.

Throughout the past decade, Ms Dudley has worked on hundreds of projects, but one that stands out as a highlight was successfully establishing Urban Utilities as an entity in 2010, and maintaining continuity of service throughout the process.

“It was a $4.3 billion transaction that merged five water and sewerage businesses into Australia’s fourthlargest distributor–retailer. It’s not often you get the opportunity to get in at the ground floor and grow with an organisation, so it’s been a real privilege,” Ms Dudley said.

She said that the change in company culture and championing inclusivity have also been some of her most proud initiatives. “Diversity really lifts the overall performance of an organisation – not just diversity of gender but diversity of thought, experience, background and ethnicity, which is why implementing a Diversity and Inclusion Strategy was always high on my agenda.

“Since we started measuring Employee Effectiveness in 2014, our score has increased by 58 per cent, which is a testament to the ongoing investment and commitment.”

A decade of challenges

A decade tenure doesn’t come without its fair share of challenges, with the period of water reform in the early 2000s one of the biggest challenges faced by not only Urban Utilities, but the entire South East Queensland water industry.

“Initially, Urban Utilities was going to be a retail business, with a separate water distribution business to service the entire region. But in mid 2009, the model changed, and the combined distributor-retailer model was adopted,” Ms Dudley said. “It was unclear whether Urban Utilities would continue in this form which led to feelings of uncertainty and instability right across the industry.

In turn, it became difficult to attract and retain staff, which was an additional stressor at the time. “On top of that, we had the challenge of merging five individual, and very differently run, entities in a short time frame. We were dealing with a melting pot of cultures, values and personalities, so a lot of work was required to become one cohesive team, working towards a shared purpose.

If merging five unique entities wasn’t challenging enough, not long after Ms Dudley began her time at Urban Utilities, the state faced some of the deadliest floods it had ever seen. Queensland suffered catastrophic floods in January 2011, which according to Ms Dudley profoundly impacted Urban Utilities.

Not only was 60 per cent of the utility’s infrastructure extensively damaged, but the natural disaster left Urban Utilities with a property damage bill in excess of $100 million.

“Not two years later, the region was, again, ravaged by flood water. Whilst this period was devastating for the business, we used our learnings to develop a robust Flood Resilience Program, which really paid dividends earlier this year when parts of our service territory were flooded for the third time in 11 years. Thankfully, we were able to recover our critical assets much faster.”

The past decade has seen a new innovative shift in asset management, with more choice bringing a heightened focus on improving customer experience and championing sustainability.

Ms Dudley said the water industry has undertaken a transformational shift from being asset-centric to customer-centric. “Once upon a time, a burst water main may only have been addressed in terms of the fastest, most costeffective way to repair the pipe. 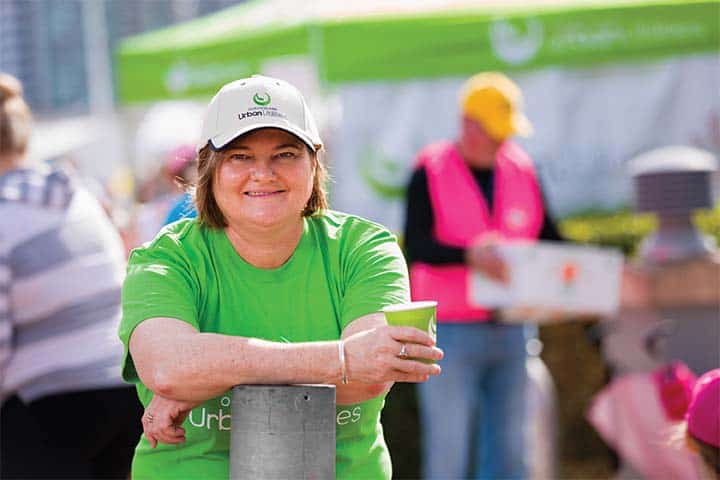 “Soon after becoming CEO, I made it my business to personally engage with each and every employee, to hear their questions and concerns and to ensure they felt connected with Urban Utilities’ newly created purpose and vision.”

Now, we look at it through a customer-impact lens and ask questions like: Who relies on that pipe? How will losing water affect them? What can we do to minimise disruption?”

Ms Dudley said that Urban Utilities has taken great strides in becoming a customer-focused organisation, using specialised teams that understand and attend to the unique requirements of different customers; and using data and insights to provide personalised services.

“The industry has also collectively embraced an innovation mindset and is now thinking outside the traditional solutions to deliver greener, smarter services that are more reliable and affordable for customers.

“We have also evolved from being primarily a service delivery industry to one that is a key player in our region’s growth and prosperity – one that enhances the liveability of its communities and creates a meaningful impact on society.”

Urban Utilities’ reputation in the industry is synonymous with innovation, with the Urban Utilities’ Innovation Program delivering operational efficiencies and improving safety, customer and environmental outcomes.

In Urban Utilities’ Research and Development Program, future areas of innovation are discovered, working with the industry and research partners to find smarter ways of operating.

“The success of the Urban Utilities’ Innovation Program was really cemented when we made Australia’s Most Innovative Companies List in
2015 and again in 2018. Also in 2018, we were named one of the Leading Utilities of the World, which is a network of some of the world’s most innovative water utilities.”

Women in the industry: the ceo chair is for everyone

Ms Dudley’s career is notable for many reasons, one of which is her work to not only normalise, but encourage women in senior leadership
positions in the water industry, saying that to attract women to the water industry, it’s important they have strong and successful role models to guide and inspire them.

“Sometimes people are surprised when I tell them I’m a CEO, and even more surprised that I’m the CEO of a utility, because neither are roles traditionally held by a woman,” Ms Dudley said.

“To overcome this stereotype, we need to change the perception that CEO roles are held exclusively by men.” Ms Dudley said that leading by example is the key to attracting more women to industries that are historically male-dominated, and fostering the right culture to retain women; such as promoting work/life balance through a range of flexible and supportive work options and access to various leave.

“The fewer hurdles there are for women to progress their careers, the more likely it is that the industry retains quality talent. “If young women don’t see examples of female chemists, engineers, treatment plant operators or CEOs, they are less likely to imagine or pursue those career paths for themselves. 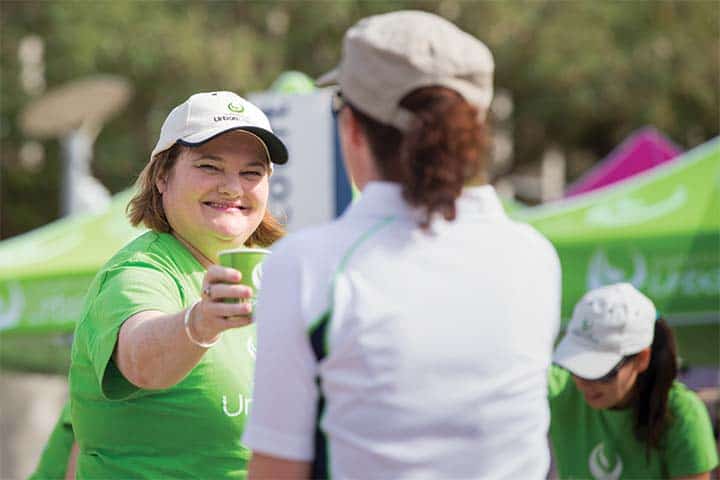 “Thankfully, there are organisations around now that are committed to connecting young women with mentors in STEM-based industries, and Urban Utilities is proud to be involved.” Ms Dudley said it is not only critical to address the gender imbalance in the industry, but also focus on fostering a culture of diversity and inclusion; where an individual’s contribution, knowledge, skills and experience is valued and recognised.

Ms Dudley said she is excited to see what the future holds and how water utilities will play a greater role in shaping the livability of Australia’s communities.

“I’m also looking forward to seeing water utilities become embedded in the early stages of the community planning process, along with the State Government, regulators, councils and developers, and for these stakeholders to consider us an essential partner in creating liveable communities.”

Ms Dudley believes this will also involve engaging with customers to codesign sustainable blue/green spaces that suit the needs of both current and future generations. To those just starting out in their water utility career, Ms Dudley recommends networking with likeminded people, as it’s a great way to share ideas, raise your profile and increase your confidence.

“Also find a mentor whom you respect and admire. Ask to accompany them to industry functions or sit in on meetings as an observer. Ask them questions and brainstorm ideas. There’s always something new to be learnt. “And take risks! Don’t underestimate your abilities. If you’re offered an opportunity, grab it with both hands and see where it takes you.”

Ms Dudley is finishing up her tenure as CEO in August 2022, with plans to continue serving on the AWA and WaterAid boards, and is looking forward to taking on additional board roles if they may arise.

“I’m also passionate about leadership and creating high-performing teams, and plan to coach executives and board members in the areas of conversational intelligence and psychological safety.

“From a personal perspective, I’m keen to tap into my artistic side, maybe take a few art classes and see if I have any hidden talent! I also plan to fulfil my long-held ambition to learn French.”

As for her legacy, some might think it hard to choose just one after looking at the extent of innovation Ms Dudley has brought to the industry  throughout the past ten years.

“It’s Urban Utilities’ Innovation Program and innovation culture that I see as being the legacy I’ll leave. Innovation is a personal passion of mine, so being able to watch the program go from strength to strength and see it attract global attention has been one of the most rewarding parts of my role as CEO,” Ms Dudley said.