Five years ago, USC Australia set a goal to be carbon neutral across all its university campuses by 2025 and committed to an ambitious Carbon Management Plan. An innovative ‘water battery’ was the first major step on the university’s path toward carbon neutrality, with the project demonstrating a commitment to emissions reduction, education and industry collaboration.

Under its Carbon Management Plan, the university aims to achieve energy abatement on its campuses as widely as possible, rather than simply purchasing carbon offsets. This means the focus is on energy efficiency and renewable energy opportunities.

A fruitful partnership between USC and resource management company Veolia is behind the recent project that is gaining international attention for its ingenuity and resourcefulness.

“USC has the benefit of being a young and growing university with a lot of environmental and engineering expertise on our research, academic and professional staff.

That’s allowed us to be informed and nimble, and allowed us the flexibility and foresight to do things differently,” Mr Snyder said. 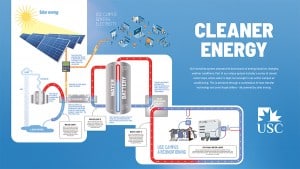 Thinking outside the box

Reducing emissions is an enormous challenge and it requires ‘out of the box’ thinking.

Wanting to show the world that with sophisticated engineering design, the right partnerships, and innovative financial and legal agreement, major change can be achieved on a relatively small budget, the university set to work on a thermal energy storage tank, or ‘water battery’.

Dennis Frost, Manager, Energy and Infrastructure at USC, took up the challenge.

“We didn’t want to just throw solar panels on the roof and forget about it,” Mr Frost said.

“In Australia, air conditioning and ventilation is one of the most significant contributors to the carbon footprint of large organisations and, in southern Queensland, the most appropriate source of renewable energy is solar energy.

This led the team at USC to focus on channelling solar energy to increase the efficiency of the air conditioning process.”

The innovative system chooses the best source of energy based on changing weather conditions. Part of the unique system includes a series of closed water loops, where water is kept cool enough to use within campus air conditioning.

This is achieved through a combination of heat transfer technology and centrifugal chillers – all powered by solar energy.

The 6,000 solar panels generate 2.1MW of power, with any excess electricity going towards powering the campus or back into the grid.

The centrifugal chillers use environmentally friendly HFO refrigerant in a heat transfer process that cools the water contained in water loop 1 – the ‘water battery loop’. In this loop, water from the university lake is used to remove heat from the chillers during the chilling process.

The warm water is then cooled in cooling towers, the water evaporates and returns to the earth as rain. By using the lake water, the university is saving 802ML of potable water.

Water loop 3 is the ‘chilled water loop’. Water in this loop is circulated throughout the campus and used in a heat exchange to supply cold air and remove heat from air conditioning systems throughout the loop.

By generating its own energy to operate the air conditioning systems, the university has saved over 100,000 tonnes of CO2 emissions and cut campus grid energy use by 40 per cent. 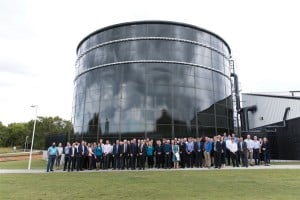 The project also included the development of a high-end plant room that not only incorporated innovative engineering solutions, but is also designed to function as a teaching and learning space.

The team at USC sees the entire project as a classroom that it wants to share with its students – now and well into the future.

Every aspect of the project will be studied by students in business, science, engineering, sustainability and other departments. This will include student visits to site, guest lectures and more.

“The ‘water battery’ was the first major step on our path towards carbon neutrality. USC is building a new campus at Moreton Bay set to open for Semester 1 this year and based on the success of this project at the Sunshine Coast campus, they have similar exciting ideas in the works,” Mr Frost said.

A large team from USC and Veolia was involved in the project, led at USC by Dr Snyder; Mr Frost; Director of Asset Management, Iona Beauly; and at Veolia by CEO, Danny Conlon; Director of Energy, Grant Winn; and Regional Energy Services Manager, Queensland, Andrew Darr.

USC has a long-standing relationship with Veolia, who was initially providing air conditioning maintenance services.

“Based on this relationship, we approached Veolia with an idea to build an innovative system that integrated large-scale solar PV with the storage of chilled water for air conditioning purposes and they enthusiastically came on board,” Mr Frost said.

“The trust and transparency we had established allowed us to navigate a changing landscape to develop the technical and commercial concepts together.”

In addition to designing the system itself, it was also necessary to develop a business model under which the project could proceed. To this end, the partners used the BOOT model (Build, Operate, Own, Transfer) to develop the contract, under which:

Veolia Director of Energy, Grant Winn, said, “Ultimately, it was the strength of the partnership between USC and Veolia that underpinned the entire project and enabled it to succeed.”

Mr Frost said, “Initially, we intended to work with Veolia to design and implement the project but once the feasibility study began and the scale of the project became apparent, it became clear that we were not in a position to fund the full project.”

Veolia and USC then worked together to develop the business arrangement. Using a Queensland Government procurement guideline (the Market-Led Proposal), USC granted Veolia a six-month exclusivity period to design the system and develop the economic modelling, with both parties agreeing on a transparent, open book arrangement whereby Veolia and USC would share all information relevant to the project.

Not only has the university had no capital outlay, but it is also expected that the project will lead to over $100 million in savings. 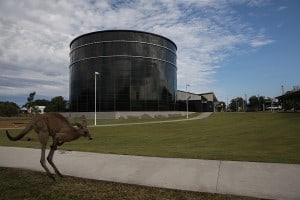 Both the project and Mr Frost have been recognised for the project, winning a plethora of awards.

The university and Veolia won the Out of the Box category at the 2019 6th Global District Energy Climate Awards in Iceland.