The oldest urban area in Australia will be cooler, greener and more resilient under a new approach to water management led by Sydney Water.

The Eastern region of Sydney – also known as the iconic Harbour City – is a dynamic and thriving region, home to the Central Business District and a major hub of economic activity.

Stretching from the Northern Beaches to Cronulla in the south, and from the coast to as far west as Bankstown and Strathfield, the region is expected to welcome two million additional residents by 2056. This will increase the Harbour City’s population to 4.1 million. 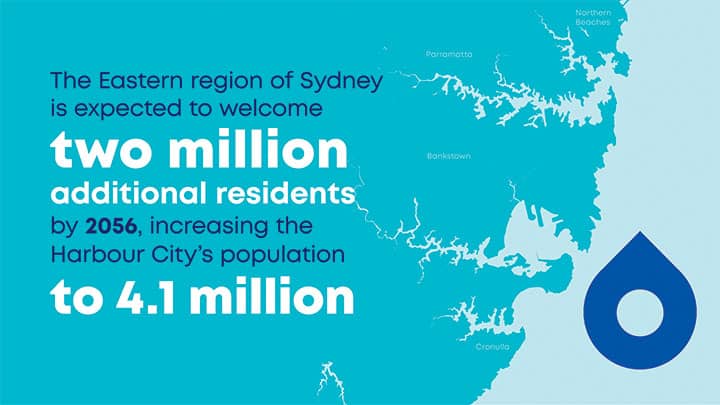 “The degree to which these benefits can be realised varies with each pathway and depends on the number and scale of solutions that are implemented in the coming decades. “We need to plan now to ensure we can support the growing Eastern Sydney region well into the future.”

Towards a circular economy

Water services in Eastern Sydney have evolved since the early 20th century as the region has grown. Since the days of the Tank Stream in Sydney Cove, the city’s first engineered water supply, the main source of water for the region has moved further away.

Today, Eastern Sydney receives most of its water from remote catchment dams in Western Sydney, and most of its treated wastewater is released into the ocean. Instead of continuing along this linear pathway, the master plan identifies options to capture and reuse materials from the treatment process to generate renewable energy.

The three ocean treatment plants at Bondi, North Head and Malabar could produce enough renewable energy from biogas to power the plants, and potentially export surplus energy to the grid.

This would equate to a 90 per cent reduction in annual greenhouse gas emissions from the plants by avoiding drawing power from the grid. Sydney Water recently partnered with Jemena to generate biomethane, also known as renewable natural gas, at the Malabar wastewater treatment plant.

This will be exported to the natural gas network, which will see thousands of homes and businesses using renewable green gas for cooking, heating and hot water.

Diversifying water supply in the east

Eastern Sydney relies on rainfall over catchment dams for 85 per cent of its water supply. The remaining 15 per cent is supplied by the Sydney Desalination Plant at Kurnell.

Investing in alternate supply options will increase water resilience, particularly during times of severe drought. The master plan considers a range of water sources which are aligned with the options outlined in the Department of Planning, Industry and Environment’s Draft Greater Sydney Water Strategy, including purified recycled water.

Sydney Water is already supplying recycled water to heavy industry, to irrigate green spaces such as golf courses, and, in some homes, for flushing toilets and watering gardens.

The challenge of too much water

The master plan addresses the challenge of heavy rainfall by including options to capture, treat and reuse stormwater, and identifies opportunities for increasing green spaces to reduce stormwater run-off.

Importantly, capturing stormwater for treatment and reuse will further diversify Eastern Sydney’s water supply. Most of the excess stormwater in Eastern Sydney is drained from the urban environment through engineered networks into local waterways.

The Green Square Stormwater Drain project, a collaboration between Sydney Water and the City of Sydney, is an important case study for better practice stormwater management.

Designed to take floodwaters from Sydney into Botany Bay, the project enabled the City of Sydney to develop Green Square Town Centre. The Centre features a water recycling plant that treats water from the drain so it can be used by residents.

The urban heat island (UHI) effect occurs when dense dark surfaces in cities, such as bitumen and building materials, accumulate and store heat. Even in the Harbour City, where cooling sea breezes generally keep temperatures at a comfortable level, there are parts of the region that get unbearably hot in summer.

The NSW Government has set a target to increase tree canopy across Greater Sydney by 40 per cent by 2056 to reduce the UHI effect. The projected tree cover will require additional water, on top of the water required to support existing parks, playing fields and gardens.

Sydney Water’s urban greening model has identified a water deficit – the gap between the water needs of thriving vegetation and available rainfall – of up to 166GL by 2036. This water deficit could be 4–5 times greater during a severe drought.

The master plan identifies opportunities to supplement water supply by capturing stormwater through permeable pavements and green roofs, particularly in areas undergoing urban renewal. Using stormwater for the passive irrigation of street trees will also mean we have more water for more uses.

Water belongs to all of us

Paul Plowman said the vision of a regenerative Harbour City can only be realised through active collaboration. “Sydney Water welcomes the opportunity to continue working with state and local government, the development industry, business and local communities to sustain  greener, cooler and more resilient Eastern Harbour City now and into the future.”

The Eastern Sydney Regional Master Plan is available on the Sydney Water website.