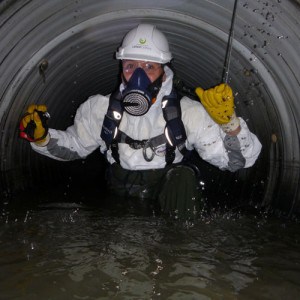 A major Queensland-based utility has been awarded two out of the four major awards at a national trenchless technology conference held on the Gold Coast.

Queensland Urban Utilities took out Project of the Year in both the rehabilitation and new installation categories at the Trenchless Australasia No-Dig Down Under Gala Awards.

Queensland Urban Utilities spokesperson, Michelle Cull, said it was great to put Brisbane on the map for two major projects – the rehabilitation of the S1 Main Sewer and the Woolloongabba Sewer Upgrade.

“We worked with Interflow to upgrade the 100-year-old S1 Main Sewer in one of the most unique sewer projects ever undertaken in Australia,” she said.

“It was a challenging project due to the age, size, location and depth of the pipe.

“The sewer carries 60 per cent of the city’s sewage, spans 1.5m in diameter and is buried eight storeys beneath one of the city’s busiest roads.

“Closing the road was not an option, so we used the latest trenchless technology to reline the old concrete pipe with a new pipe made from polyethylene with very little disruption to traffic.”

Project of the Year for best new installation went to our Woolloongabba Sewer Upgrade, which was delivered by contractor John Holland.

The five year $82 million project is Queensland Urban Utilities’ biggest on record, and was delivered not only ahead of schedule but $3.7 million under budget.

It involved installing more than 5km of large trunk sewer mains in a densely populated area of inner Brisbane.

“The new sewer pipe runs under a main busway and motorway, passing schools, restaurants and The Gabba stadium, home to international cricket matches and the AFL,” Ms Cull said.

“As an added bonus, the Gabba’s project manager Steve Gibson is a top three finalist for International Project Manager of the Year.

“We wish Steve all the best in Panama, where the winner will be announced late this month.”