Horizontal Directional Drilling (HDD) is a steerable trenchless method of installing underground pipes, conduits and cables in a shallow arc along a prescribed path by using a surface launched drilling rig, with limited impact on the surrounding area. Unitywater, which supplies water and sewerage services to the Moreton Bay, Sunshine Coast and Noosa regions in South-East Queensland, utilised this method of trenchless technology on its Caloundra and Mountain Creek to Kawana sewerage pipeline projects, which featured the longest horizontal directional drill of this size pipe undertaken in Australia.

Between January 2017 and July 2018, Unitywater upgraded two major sewage transport systems, including two new pipelines – one in Caloundra and one in the Mountain Creek area.

Amanda Creevey, Executive Manager Sustainable Infrastructure Solutions at Unitywater, said there was a need to increase the capacity of the sewerage network in both locations.

“With new developments and expected population growth in these areas we need to ensure we have the right infrastructure in place to cater for our communities while protecting public health and the environment.”

Horizontal Directional Drilling was chosen as the preferred construction method as it minimised the impact to the environment, local community and traffic.

“There were a number of factors considered when planning these projects and choosing horizontal directional drilling. The majority of the trenchless sections were selected so as not to disturb water bodies, intersections and environmental areas, and to improve sewerage system efficiency,” Ms Creevey said.

“We were very mindful of the local community and road users, and using horizontal directional drilling helped to minimise any disruption and inconvenience for them.
“Overall, about 81 per cent of the pipelines were constructed using trenchless methods.”

A new pipeline for Caloundra 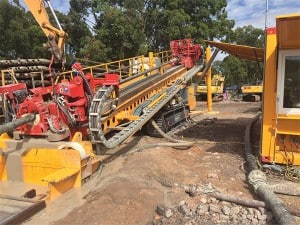 Construction consisted of two horizontal directional drills, the longest being 1.6km – making it the longest drill of this size pipe installed in Australia.

The new pipeline has been connected to existing pipelines and sewage pumping stations which supply the Kawana STP.

Diverting sewage from Maroochydore to Kawana

The Kawana STP is currently undergoing a major upgrade to increase the plant’s capacity from 90,000 people to about 200,000 people.

Ms Creevey said that Unitywater recognised a number of benefits in diverting sewage from the Maroochydore STP to the Kawana STP. 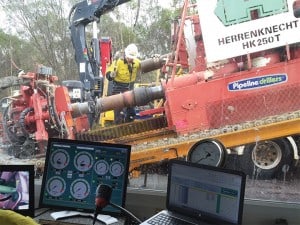 “Although the horizontal alignment was determined, the trenchless methodology (i.e. extending, reducing, deepening and/or joining) remained open to the contractor to encourage innovation and efficient construction methodologies,” Ms Creevey said.

“The contractor combined two proposed horizontal directional drills into a single drill as it was a more efficient construction methodology. This helped reduce the construction footprint, minimise vegetation clearing, improve overall sewerage system efficiency and address odour issues which resulted in less impact on the community.

“All the trenchless sections of the alignment were either extended or joined, significantly minimising the construction footprint.

“Positioning dual rigs on each drill enabled a closed loop system for mud management, and noise impacts were reduced by drilling umbilicals under roads to allow construction equipment to be located further away from residential streets.

“Approval was obtained to use river water for hydro testing of the pipelines, saving two million litres of potable water. Test water was discharged through the STP.

Overcoming challenges for the benefit of the community

Ms Creevey said that the main challenges encountered during construction of the Caloundra pipeline were hard ground, which required a particular drill tool and methodology, and rig maintenance to ensure all equipment was well maintained.

“We were required to install an enveloper pipe under Caloundra Road to protect the road and road users. We then drilled through the enveloper pipe,” Ms Creevey said.

“We also experienced an incident where drilling fluids were released through the road surface on Nicklin Way while we were drilling. We reassessed and redrilled deeper underground.”

On the Mountain Creek to Kawana pipeline, Unitywater and Pipeline Drillers Group had to contend with varying geology, including a gravel layer and soft and hard ground in some parts, which required a different drill tool and methodology.

“This was overcome by ensuring our contractor had a rigorous design and sufficient plant and machinery to enable construction,” Ms Creevey said.

“As the rigs (and ancillaries) work so hard there are both planned and unplanned maintenance activities. We ensured the plant and machinery were well maintained and our contractor had sufficient spares.

“Once again, we had to keep local residents in mind when completing works to minimise any noise and dust inconvenience.”

In the long term, these upgrades will deliver a number of benefits to the community, such as: