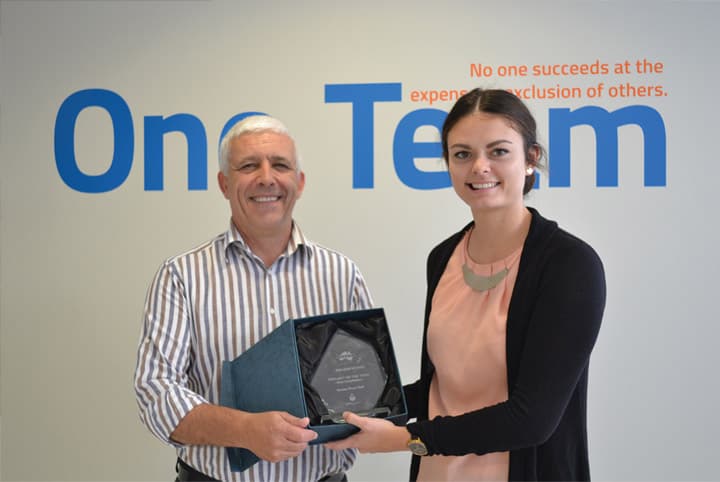 When a sewerage main at the mouth of the Noosa River in Queensland failed, Unitywater needed to carry out emergency repairs while limiting impacts on customers and the environment. As the pipe had separated at the failure location, repair by relining was not possible and horizontal directional drilling (HDD) was considered the best chance at a successful outcome. Unitywater’s quick thinking and innovative response earned it the 2017 National Australasian Society for Trenchless Technology (ASTT) Project of the Year – New Installation award.

The 30-year-old sewer rising main crossing Weyba Creek at the mouth of the Noosa River had originally been installed by trenching the pipe around two metres deep into the bed of the creek.

When a section of pipe broke in September 2015, sewage flow was temporarily redirected to an alternative network. Unitywater needed a fast and more permanent solution, however, for several reasons.

Noosa was about to be hit by an influx of visitors as the peak summer tourist season was approaching, the alternative network had limited capacity and any heavy rain would have exceeded that network’s capacity.

This would have likely caused sewage overflows at various points across Noosa.

As part of its emergency planning in response to the sudden break, the water and sewerage services provider considered three potential long-term solutions:

HDD was chosen because it provided the following benefits: relatively quick to establish, minimal construction impacts on Weyba Creek, and protection of all local flora and fauna. Overall, it provided a sustainable long-term solution which ensured the sewerage system operated normally  in time for the summer tourist season.

“Given the time pressures and the immense environmental difficulties faced with trenching across the creek, as well as the uncertainty of gaining approvals, we decided to undertake an emergency horizontal directional drill,” Mr Barnes said.

“We then set about rolling out a fast-track project to install 350m of DN315 product pipe parallel to, and below, the failed main.”

Mr Barnes said that undertaking a HDD project to complete urgent reactive work required innovative thinking to overcome the obstacles and complete the project in the limited time available.

“Not only is Noosa an internationally-renowned tourist destination, its estuary has achieved the highest environmental health rating in South East Queensland  over many years,” Mr Barnes said.

“The HDD locations needed to avoid impact to all surrounding areas of environmental significance and choices were limited. After assessment, the entry pit and rig were located within a Noosa Council park on Mossman Court on the north side of Weyba Creek and the exit drill within  a nature refuge on the south side.”

“The creek is a designated fish habitat area, and demanded careful management of silt by bunding, sand bagging and placement of a silt curtain,” Mr Barnes said.

“Vegetation in the nature refuge, where the drill was to exit, is protected, therefore no vegetation could be damaged during construction.

Access and activity had to be confined to the narrow 650m concrete pedestrian path through thick vegetation. To avoid damage, any machinery accessing the site had to weigh no more than five tonnes.

“The nature refuge is also a protected habitat for several species of animal, therefore fauna controls had to be adopted throughout the project. These included dedicated fauna spotters and a pre-construction survey.

“Council advised that the path through the nature refuge needed to remain open as it was used by tour operators, visitors and locals to access a ferry.

“The council park contains trees designated by Council as protected so any vegetation removal to make way for the rig and entry pit was limited to smaller shrubs and grasses.

“All excavation works were undertaken to avoid protected tree root zones which involved excavating by vacuum on low pressure.”

Unitywater cast wide for suitable machinery with rubber tracks to use on the concrete path of the nature refuge.

A suitable geotech drill rig was brought in from interstate, and the HDD contractor sourced lightweight machinery and developed construction methodologies to suit.

“The project also needed dedicated stakeholder management that included face-to-face interaction with multiple property owners and managers, and environmental groups to keep them informed throughout the project and provide them with an appropriate channel for any concerns,” Mr Barnes said.

“Noise was their major concern, which we managed by placing sound curtains around noise-generating machinery and on sections of temporary fencing.”

Delivering a successful project in a tight timeframe

Pipeline Drillers, which won Unitywater’s contract for the project, was able to mobilise in the restricted space available in Mossman Park on 26 October 2015.

The quality of the under-creek ground conditions made for relatively slow work and the pilot hole was completed on 18 November.

To manage the risk, the project managers planned a conservative triple reaming process. Two 25,000 litre sucker trucks were employed full-time to transport the mud from one side of the creek to the other.

The final hole-conditioning drum was passed through in the next two days and the DN315 HDPE product pipe was successfully installed on Sunday 29 November.

The project concluded prior to the busy Christmas holiday period, as planned.

Unitywater was thrilled to win the 2017 ASTT Project of the Year – New Installation award, which was presented at the ASTT gala dinner on Thursday 14 September 2017 as part of the No-Dig Down Under conference.

“This was an innovative project and we were thrilled to be recognised for the work we carried out in such a highly sensitive environment,” Mr Barnes said.

“In response to a difficult situation, Unitywater stepped up to plan and execute an emergency horizontal directional drill in a highly sensitive environment.

“The way the team responded in this very challenging situation was truly remarkable. We used innovative thinking to meet stringent environmental demands and overcome construction constraints, installing a permanent sewerage pipeline within a narrow window of opportunity.”