AGL has increased Australia’s solar energy contribution with a $440million solar project that includes the largest solar power plant in the southern hemisphere.

The project has been built across two sites in New South Wales, Nyngan and Broken Hill, with both solar farms now fully operational and generating up to 155megawatts of electricity between them.

The project received $166.7million in funding from the Australian Renewable Energy Agency (ARENA) and $64.9million from the NSW Government.

The Nyngan Solar Plant reached full generation in June 2015 and to date it has generated 60,000MWh of renewable energy. It spans 250 hectares and has 1.36 million solar PV modules, making it Australia’s largest solar plant.

The $290million plant is expected to produce around 230,000MWh of electricity annually, which is enough to meet the needs of approximately 33,000 homes across New South Wales.

Nyngan is a partnership between AGL Energy Limited and First Solar, and its construction employed more than 250 people and boosted the local economy. First Solar was awarded the contracts for the engineering, procurement and construction (EPC) for the project and will maintain the facilities for the first five years.

“The Nyngan Solar Plant is the largest in Australia, with sister plant, Broken Hill, the second largest. The delivery of these plants has marked the birth of the large-scale solar industry in Australia and demonstrates that our local industries have the capability to deliver large-scale solar PV projects on time and on budget,” said Adam Mackett, AGL Project Manager for the Nyngan and Broken Hill solar plants.

Both these projects have created jobs and developed regional skills through industry development. During the peak of construction, the Nyngan Solar Plant had up to 250 people and the Broken Hill Solar Plant had 150 people working on-site.

“By Christmas 2015, both plants combined had generated over 175,000MWh of renewable energy, which is enough to power around 29,600 average Australian households annually.”

ARENA’s Ian Kay said “ARENA has shared a myriad of knowledge throughout the construction of both plants, from how to most effectively procure equipment, to managing local supply chains. This invaluable information will give future large-scale solar projects a head start.” 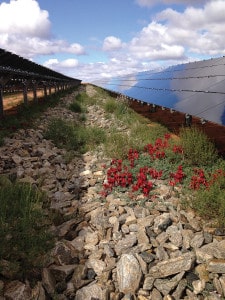 The research infrastructure will be used by the University of Queensland (UQ) and the University of New South Wales (UNSW), who are conducting related academic research under the Education Investment Fund (EIF) component of the project.

The University of Queensland will build their own 3.275MW PV research plant and test tracking technologies and performance, energy storage, and operational strategies, while UNSW will develop modelling techniques for the integration of solar power stations into the electricity grid.

The research conducted and the renewable power generated from each site will pave the way for more utility-scale solar plants to be built in Australia in the future.

ARENA CEO Ivor Frischknecht said the project is already achieving one of ARENA’s key aims of increasing the amount of renewable energy in Australia.

“AGL’s solar project at Nyngan and Broken Hill represents a big investment by the company and also by ARENA,” Mr Frischknecht said.

“And the knowledge gained from its successful launch and ongoing operations will lead to further improvements in technology and reductions in costs for the sector.”