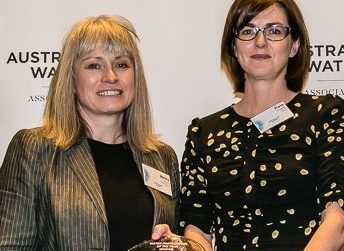 The Australian Water Association has named the Victorian Water Professional of the Year for 2016.

Dr Melita Stevens, a Melbourne Water Principal Scientist and microbiologist with a background in public health and risk assessment, received the award.

Dr Stevens has been involved in the development of risk-based management systems for drinking water and recycled water, including contributing to both World Health Organisation and Australian drinking water guidelines and the Australian Guidelines for Water Recycling.

This achievement honours Dr Stevens’ passion and commitment to the water industry, while also recognising exceptional leadership and influence.

Dr Stevens has a PhD in Microbiology from the University of Sydney, is an Adjunct Professor at RMIT and an Honorary Senior Fellow at Melbourne University, and is an author of the World Health Organisation document Water Safety Plans, which introduced Hazard Analysis and Critical Control Points systems for the management of water supplies.

“Dr Melita Stevens has made a significant contribution to the Victorian water industry and the Australian water industry more broadly, and we congratulate her on this well-deserving achievement,” Mr McKeown said.

“She has also been instrumental in a number of the Association’s committees in the past, including the Ozwater’16 steering committee and a number of the specialist network committees, in particular catchment management.

“We look forward to welcoming her to Ozwater’17 in Sydney for the announcement of the national awards.”

Rhys Anderson, a senior process engineer and the Water Business Leader for Victoria, South Australia and Tasmania at Arup, won the AWA 2016 Young Water Professional of the Year award.

Mr Anderson was recognised for his technical ability and dedication to the water sector including his contributions to the Main Outfall Sewer and Yarra Pool projects for Melbourne Water, and in taking a lead role in the Yarra Park recycling facility.

Mr Anderson has also taken on a number of voluntary roles, including a role as a guide for the Yarra Park plant and working with disadvantaged students.

Mr Anderson and Dr Stevens are now automatically entered into the nationwide Australian Water Association Awards, to be announced at OzWater’17 in Sydney.