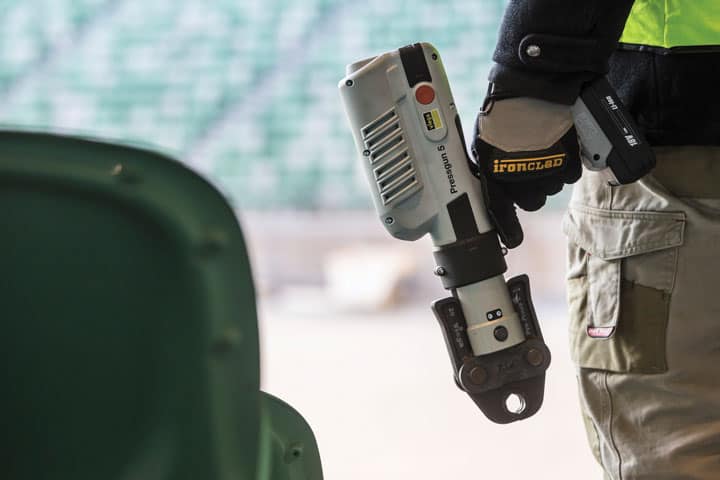 Named after the revered Australian tennis great, Melbourne’s Rod Laver Arena enjoys international fame as the main venue for the Australian Open — the first Grand Slam event of each calendar year. Officially opened in January 1988 at a cost of $94 million, the facility has become one of the world’s favourite sporting and entertainment destinations.

In June 2015, it was announced that the arena would undergo a complete multi-million-dollar refurbishment under the management of Lend Lease Building Contractors. The initiative is part of a $700+ million Melbourne Park Redevelopment project designed to significantly enhance every aspect of the audience experience and rejuvenate the external design.

Keeping it in the ballpark

With the facility remaining operational throughout the refurbishment, the renovations and extensions will be opened progressively over the next four years of construction, with completion expected in 2020. Not surprisingly, it’s a program that presents a series of unique logistical challenges.

“The obvious challenge that contractors faced on this job was time, and having to adhere to the Tennis Centre’s tight schedule,” explains Viega Planning Consultant, Richard Andrew.

“There was quite a bit of pipework involved. As well as toilets, showers and kiosks, piping infrastructure also had to be provided for new coaching, massage and medical areas. In order to get the job done, contractors were actually working two shifts per day.”

The need for speed

With the ability to meet stringent project deadlines crucial, Viega’s world-renowned Propress technology was the obvious choice when it came to installing a reliable pipework solution.

“With such a tight schedule, our products were perfect for the job,” Richard said.

“Propress enables a very quick install, saving 75 per cent of labour time. And there’s no need to rely on somebody’s ability or skill to weld. It’s really just a case of putting it together, pressing it, and getting a certain joint each time. The other advantage is that installation can be done by one person — not two. They can also work on a ladder or a scissor lift and put our systems together safely.”

Wilson Plumbing and Draining Project Manager, Jamie Morison, said the Propress system (which can be installed without a hot works permit) enabled contractors to carry out installation quickly and effectively.

“The need for welding in tight areas, which can easily trigger smoke alarms, is negated when using Viega,” Jamie explained.

“There are a lot of advantages to installing Viega, such as its reliability, quality, and the fact it is so easy to use. Viega is an awesome product and because it saves us a lot of time we use it on the majority of our projects.”

The ability to easily locate leak points and un-pressed fittings during the testing phase (via Viega’s patented Smart Connect-Feature) is another key feature that qualified Propress as a perfect fit for the project.

When the fitting is pressed, the Smart Connect feature is closed, forming a permanent leak-proof joint. If the connection does have a leak, a ‘dry’ leakage test will reveal a visible pressure decrease over the entire pressure range from 2.2kPa to 300kPa. If the leakage test is carried out with water, this visibly escapes from the un-pressed fittings in the pressure range of 100kPa to 650kPa.

“We visited the site on three occasions and went through installation procedures and made sure the guys were installing it properly,” Richard said.

“We also oversaw progress of the work and made recommendations as we went.”