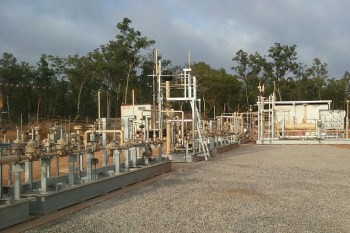 Power and Water’s Wadeye Power Station (NT) has entered its final stages of construction, with generation units set to be brought on line from 28 October.

The station is a $13.93m project utilising gas as a low emissions and low cost source of power. The construction of the new gas power station will mean that the old diesel power station can be shut down and the surrounding communities of Peppimenarti and Palumpa able to be connected by high voltage transmission feeders. Their respective power stations can then also be closed.

Planning for this project commenced in 2006 when Power and Water determined that the current Wadeye Power Station could no longer meet the needs of a growing population in the local region. The construction of the gas pipeline from the Black Tip field past Wadeye provided the opportunity to install a take-off point, a gas supply valve on the pipeline, for future use.

The site is compliant with all third party regulatory requirements and after testing is complete, generating units will progressively be brought on line from 28 October. The current diesel power station will be decommissioned when the new station has been proved and works are complete.