$37 million worth of upgrades are underway to three of Western Water’s recycled water plants at Sunbury, Melton and Gisborne in Victoria, to increase sewage treatment capacity and water quality.

The upgrades will ensure the plants can cope with increased sewage flows due to population growth, with each town projected to grow significantly in the years ahead.

Western Water operates a dedicated sewerage network, which transfers sewage from homes and businesses via sewer pipes and pump stations to one of its seven recycled water plants for treatment.

$65.1 million has been invested in capital works in 2016/17, with Western Water expecting to spend around $80 million a year in the next five years. Over $27 million has been spent to date at the Sunbury Recycled Water Plant, including the recent construction of a new membrane tank and associated pipework, a 28m high odour control stack, expanded dewatering facility and new inlet works.

The Sunbury plant was originally designed to treat an average of 6.5 million litres of sewage per day from homes in Sunbury and Diggers Rest – after the upgrade it will be able to treat 9.2 million litres per day. The $53 million project is being delivered under a design, build and 10-year operate contract with Downer Group. 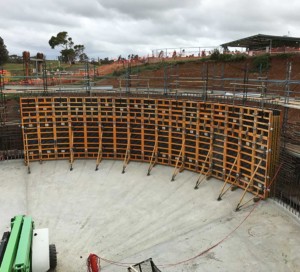 Construction is under way at the Melton Recycled Water Plant on a new $8 million digester, with the concrete base poured and works begining on the external walls. A digester is technology that converts sewage into decomposed waste that after further treatment is then suitable for use as a natural fertiliser. It is also converted into a methane gas burned as fuel to produce electricity at the site. The new unit is expected to be completed mid-2018. 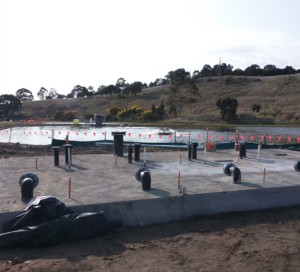 Excavation works have started on a new $1.6 million UV filtration and disinfectant system at the Gisborne Recycled Water Plant. This is the first of several planned upgrades for the site in the next few years, including a new dewatering system, bio-reactor unit, clarifier treatment tank and new inlet works.