Goulburn Valley Water took out first place at the 2017 Ixom Victorian Water Taste Test competition at the WIOA conference in Bendigo. Here, we take a look at the history of the competition, the importance of recognising Australia’s water operators, and what it takes to have the best tasting water in the state.

The Ixom Victorian Water Taste Test is an annual competition that selects the highest quality drinking water in Victoria as a way to recognise local water service providers and their ability to supply safe water to the community.

The competition began in 2012 when Ixom partnered with the Queensland Water Directorate to hold a water taste test as a fun way to encourage operator and council engagement. After holding the first competition, Ixom was inundated with people calling to ask how they can be involved in the initiative.

A year later WIOA hosted the competition at its Bendigo trade show and a tradition was born. 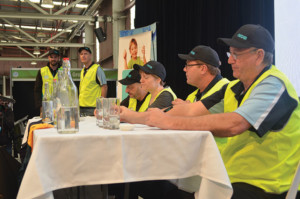 Judges assembled for the taste test.

Ixom Training Manager, George Lech, said he believes the competition became so successful so quickly because of the well deserved recognition it provides Australia’s water operators.

“[The competition] celebrates the hard work that operators do day-to-day in providing absolutely clean pristine water. It is really a testament to them, not only the people who make the potable water, but also the people involved in the wastewater treatment as well. Their role is just as critical because they are able to treat the water to a fantastic standard,” Mr Lech said.

“That’s what WIOA, the Queensland Water Directorate and Ixom are really proud to be a part of this, to recognise and promote the sort of work that these operators are doing.

Craig Mathisen, WIOA Chief Operations Officer, said the general public would be surprised to learn the complexities involved in
delivering high-quality water to taps each day.

“The competition is a testament to the excellent quality of Australian water, and to the diligence and commitment of the operational employees who deliver it to our communities,” Mr Mathisen said.

“We want to celebrate our unsung heroes – the water operators and the maintenance crews who work all year-round to ensure we have high-quality water, which is essential to keep us alive.”

The competition heats up 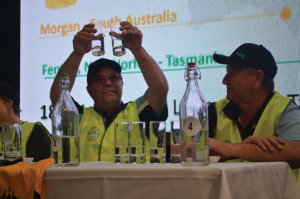 Judges comparing the clarity of the finalists samples.

All water organisations in Victoria are invited to nominate one preferred sample of tap water for inclusion in the taste test competition. The judging begins with an intense round of heats pinning entrants against each other as they fight it out to be named the best water in the state.

“We hold a series of heats, and what we try to do is get the operators involved. So we would have a whole series of samples, they would taste them and they would rate them. They give them a number and the ones that scored highest then go in as finalists,” Mr Lech said.

“The water quality can vary and, oddly enough, even though you would think it’s only water how can you be able taste the difference, but you can depending on the water source. You might get something that’s coming from an artesian well and from that you get a lot of dissolved minerals and you might be able to taste that it’s actually got a mineral type of a taste.”

“You’ve got others that might have surface water, and you might have organic matter in there, and you actually start to taste that slight peat type of a taste. Which is all fine, all acceptable, and all totally safe.”

At the 2017 Ixom Victorian Water Taste Test in Bendigo, the top four samples were held under scrutiny by a panel of water connoisseurs. The samples were judged on a point scale of good to best based on clarity, colour, smell and above all, taste. The scores were aggregated and the winner was the sample that achieved the highest combined score. 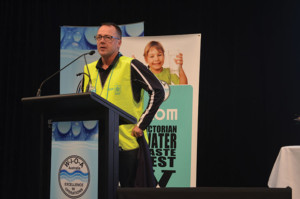 “This is the second time we’ve won in the last three years. So we sort of went on our lessons learned from when we were successful. We won with Marysville two years ago, which was a brand new micro-filtration plant working in an Alpine region, so we had a great rural water quality there with the Stevenson River. Then the operators in the area said to me, ‘We think the water at Merrijig is just as good’,” Mr Nash said.

“Merrijig is located between Mansfield and Mount Bulla, and supplied by an alpine region through the Delatite River. It’s a similar plant to Marysville, as they’re both micro-filtration.

“I had inspected the plant probably a month ago. It was in great condition and the operators were taking a lot of pride in the plant, so I had a lot of confidence in selecting the water for the taste test for this year.”