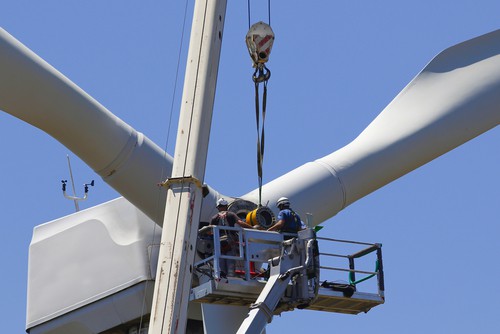 The first wind turbine at the Coopers Gap Wind Farm is now complete, marking a huge milestone for the project.

AGL General Manager of Development and Construction, Dave Johnson, said this turbine is one of 123 turbines to be erected.

“Projects like this involve enormous efforts by many stakeholders; the logistics of getting the massive components to site alone is one of the areas which can prove challenging,” Mr Johnson said.

“We have worked with many government agencies and others to have the components transported from the Brisbane Port to our site for what will be a 453MW power station.

“I thank everyone for their patience and know they are part of something quite amazing, especially when they see the 67m blades on the roads.

AGL Manager on site, Ray King, said managing roadworks along major routes was an example of things which need to be constantly managed throughout construction.

“If anyone has travelled along the Logan Motorway or up the Toowoomba range recently, they will know there are heavy roadworks and this has made extra challenges to our transportation efforts.

“For example, we are dealing with things like the safe relocation of the traffic lights, to ensure our blades are arriving to site.

“Our aim is to have safe deliveries of the wind turbine components with minimum disruptions to everyone and this is not always a straightforward task.”

Mr King said a lot of the components were being stored at the site of the Brisbane Port, until roadworks and alternative routes were confirmed.

“Nobody said it was going to be easy to get hundreds of turbines out of Brisbane and up the range and we are still working towards a late 2019 completion date.”