Yarra Valley Water asks: Are we ready for recycled water? Melbourne is growing. According to the Victorian Government’s ‘Victoria in Future’ report published in 2014, the population of Greater Melbourne is projected to increase from 4.3 million in 2013 to 7.8 million in 2051. Even more striking is the projection that the number of households is set to almost double in the same period, bringing the total number of households in our capital city up to 3.1 million by 2051, and requiring the construction of 1.6 million new homes across the city.

Planning for this growth is an ongoing issue for water utility Yarra Valley Water. Meeting the burgeoning needs of businesses and residents within their service area – 4,000 square kilometres across the northern and eastern suburbs of Melbourne – requires extensive forecasting and analysis, coupled with consideration of the cost of works to the community.

Water is not a limitless commodity, and managing the expectations of a rapidly growing customer base means sometimes thinking outside the box. For Yarra Valley Water, water recycling is a strategic decision, which has allowed the company to position itself as a leader within the water sector.

“Investing in recycled water infrastructure is a long-term proposition, but one which brings about immediate benefits to our environment and the community.”

In 2006, the company gave the greenlight to the development of the Aurora recycled water treatment plant which would service the needs of a large-scale greenfield residential development in Epping North, and showcase the possibilities for recycled water technology in urban Melbourne. With the potential to convert the city’s north into a ‘green oasis’, the Aurora housing estate was designed according to a holistic environmental approach to estate planning – low impact, low waste and an emphasis on sustainability through innovation. When the development is complete, the scheme will serve 8,500 homes with Class A recycled water for toilet flushing, laundry and garden watering, as well as irrigation for public open spaces.

“In making the commitment to recycled water at Aurora, we were exploring new ground, which came at a cost premium. However, Aurora has provided a platform for innovation, and learning which is of significant value and gave us the confidence to explore future recycling opportunities such as the Kalkallo Stormwater Treatment Plant,” said Mr McCafferty. Planning for the Aurora development paved the way for recycled water – both at an industry level, and within the community. With the pressures of drought taking their toll, local governments in the eastern suburbs of Melbourne were looking for ways to maintain their local community infrastructure and reduce their reliance on drinking water for the upkeep of parks and sporting facilities. The threat of more hot summers was enough to prompt exploration of local recycled water, and in October 2007, a $3 million upgrade to the Brushy Creek Sewage Treatment Plant was announced. By November 2008, councils had access to the equivalent of two million litres – 260 Olympic sized swimming pools – of recycled water per day, freeing up drinking water supplies to the local area.

“The scarcity of water during the drought meant that the upgrade at Brushy Creek needed to be completed and brought online quickly. However, it shows how community acceptance of recycled water has evolved, and the trust that we have built within our service areas to deliver recycled water that meets exceptional standards of quality,” said Mr McCafferty. 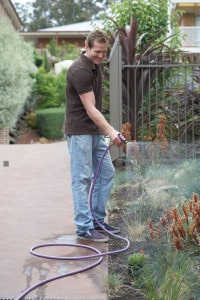 Managing potential cross contamination between recycled and drinking (potable) water systems is a serious concern for the water industry. The risk of cross connections needs to be managed to ensure public health and confidence in recycled water. Yarra Valley Water has led a research project to identify a way to monitor and detect cross connections in real-time. Working in collaboration with the Smart Water Fund, CSIRO Land and Water, South East Water and Hawk Measurement Systems, the project has developed a new inline sensor capable of detecting very small changes in water chemistry.

“Recycled water has a slightly different chemistry to drinking water, and the sensor works by measuring very small changes in electrical conductivity within the distribution network,” explained Mr McCafferty.

“Six insertion probes and four miniaturised devices are currently being field tested in live dual-reticulation networks in Melbourne. These devices are located in strategic locations across the network, in pairs, in both drinking and recycled water assets from the source all the way to the water meter.

“This research is part of the overall water industry move to intelligent networks and digital metering. This solution represents a cost effective, but highly effective and integrated solution that provides peace of mind to the community.” The next wave of recycled water projects is set to push the boundaries, with government and developer support for Yarra Valley Water’s Kalkallo Stormwater Harvesting and Reuse Scheme. The project includes the design and construction of a large wetland with an integrated 65 million litre capacity storage basin. Under the plan, stormwater runoff will be drawn from the storage basin and treated to drinking water standard (although initially used in the Class A system until the treatment plant performance is proven). The Kalkallo Stormwater Treatment Plant represents the next logical step in the water recycling journey.

With countries like Singapore and parts of the United States successfully incorporating recycled water into their drinking water networks, it makes sense for a drought addled country like Australia to explore the potential that recycling brings. But are Australians ready for a shift in where their drinking water comes from?

“Attitudes have changed. In 2006 we saw the residents of Toowoomba in Queensland actively fight against plans to introduce a recycled drinking water scheme, but less than a decade later, the city of Perth has successfully completed a three-year trial which will see them receive up to 20 per cent of their drinking water from reclaimed sources in years to come,” said Mr McCafferty.

“There is still a way to go to address public perceptions regarding changes in where their drinking water comes from, but if the drought taught us anything it’s that Australians are resourceful and adaptable, and continuing to work on non-traditional water sources is important for our long-term sustainability”.