Vegetation and trees form a fundamental and much-loved part of our urban and rural landscapes, but also pose very significant issues for energy utilities. As such, ongoing pruning programs to minimise the risk of outages and bushfire starts caused by the interaction between trees and powerlines are a major operational expense for utilities across Australia.

In the process, it has developed and transformed relationships with stakeholders, moving from an adversarial approach to one that sees a high level of collaboration to achieve best-possible outcomes.

Under the Electricity Act, SA Power Networks is required to inspect and clear vegetation from around powerlines at regular intervals not exceeding three years. This vegetation management program is undertaken by contractors, who operate to specific legislated and contracted requirements.

“In South Australia in the decade leading up to 2010, there was growing concern regarding tree trimming practices and the clearances required to meet legislated requirements. Customer complaints and media headlines highlighted growing anger at what was perceived as ‘butchery’,” Paul Roberts, Manager Corporate Affairs at SA Power Networks, and who as media spokesman was often defending the company’s tree trimming program, said.

“For some time, we had argued that we had no choice but to trim trees to the very specific clearances set out in the Electricity Act. These clearances had been established in the mid-1980s after the Ash Wednesday bushfires, and were understandably focused on minimising the risk of bushfire starts from electricity infrastructure (with falling trees and tree limbs a major cause).

“We recognised that the regulations were so highly prescriptive they would not be sustainable in the face of growing community desire for the protection of trees in our streetscapes.

“Initially, in an attempt to reduce the number of complaints through community education, we focused on improving relationships with Councils, meeting face-to-face to explain our obligations. Councillors often received complaints and were the ones who would talk to the media about the issue.”

However, it was a review of the regulations in the latter part of the last decade that allowed SA Power Networks to start talking about the opportunity to adopt a more risk-based approach to tree trimming in the metropolitan area (where bushfire risk was not a concern).

“We undertook a lot of consultation and the risk-based approach was adopted in 2010. It has certainly assisted in reducing complaints,” Mr Roberts said. 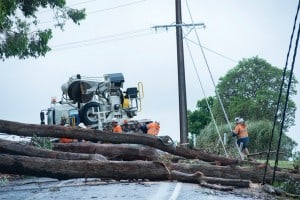 Mr Roberts said SA Power Networks also recognised the value of developing much stronger relationships with Councils and other stakeholders who have an interest in vegetation trimming.

“Our long-term plan has been to shift from a ‘tree trimming’ strategy to a ‘vegetation management’ strategy, and that’s been driven by our network assets team.”

Steve Wachtel, Manager Network Assets, said, “SA Power Networks needed to move away from a one-size-fits-all approach, to a range of approaches that suit different regions or environments, align with risk and take the local community into account.

“One of my key objectives was to reduce the cost of the vegetation program to the business, and ultimately consumers.

“I also had a very strong belief that the legislation that we were working under meant that we were pruning far more trees than was necessary to achieve safety and reliability outcomes.

“Over the past five years, we have been talking to, and working with, our key stakeholders on a range of initiatives to deliver improved outcomes. Alex Lewis, our Stakeholder Engagement Lead, has worked tirelessly to establish a structure for consultation on immediate improvements and long-term change.”

This has included the establishment of two consultative groups:

“Our operational team that manages the vegetation trimming contract and our contractors, Active Tree Services (ATS), have been very much on board with the strategy,” Mr Wachtel said.

According to Alex Lewis, a protocol for vegetation management near powerlines was developed in 2016 in consultation with Councils and the Local Government Association (LGA).

“The protocol provides a framework for consultation between SA Power Networks and Local Government, landholders and the community. The protocol was endorsed by the LGA Board in 2016 following extensive consultation with Councils (including forums attended by representatives of most of South Australia’s 68 councils),” Ms Lewis said.

“SA Power Networks has committed to reviewing the protocol with stakeholders every two years and a revised protocol will go to the LGA for endorsement by mid-2019.”

Programs for tree removal and their replacement with appropriate species are critical to developing a sustainable vegetation management plan that reduces the need for tree trimming over time.

“We have undertaken a number of tree removal projects in partnership with councils and key stakeholders in recent years. The initiatives have shown the value of tree removal and replacement programs in both bushfire and non-bushfire risk areas, and targeted the removal of inappropriate trees that required ongoing clearance,” Ms Lewis said.

“In 2018, in partnership with the Adelaide Hills Council,
we also undertook a trial to remove saplings in the Gumeracha area, which has had significant re-growth following the Sampson Flat fires.

“Much of the clearance work we are undertaking today is a result of a legacy of planting inappropriate species under powerlines.

“To address this, we have conducted trials of growth retardants for reducing tree growth and clearance costs, and the potential of extending pruning cycles for existing plantings. Looking to the future, we have developed, with stakeholders, a list of species for planting under powerlines in non-bushfire areas for each of our state’s climate zones.

The Electricity (Principles of Vegetation Clearance) Regulations 2010 is the key legislation governing vegetation clearance near powerlines in South Australia. The Regulations expire in September 2021, so SA Power Networks is exploring a number of amendments that would deliver improved outcomes to the community, improve or maintain safety outcomes and reduce costs.

“During 2018, we consulted broadly on our proposed amendments, including issuing a preliminary discussion paper (June 2018); holding a series of stakeholder workshops in October 2018; and issuing a final discussion paper (December 2018),” Ms Lewis said.

“We found broad support for key initiatives and the next step will be formally lodging a submission with the Office of the Technical Regulator once they call for submissions on the ten-year review in mid-2019.”

In 2010, the legislation was amended for metropolitan Adelaide recognising the lower level of risks associated with vegetation around low voltage (LV) powerlines. As the level of risk allows reduced clearance requirements, vegetation can be allowed to grow through LV powerlines, improving visual amenity.

From mid-2019, this approach will be applied in the regional cities of Mt Gambier, Port Pirie, Port Lincoln, Port Augusta, Whyalla, Victor Harbor and Murray Bridge, and the towns of Gawler, Goolwa and Mt Barker. As part of the ten-year review of the Regulations, SA Power Networks will investigate other areas suitable for the adoption of the ‘risk based’ approach. 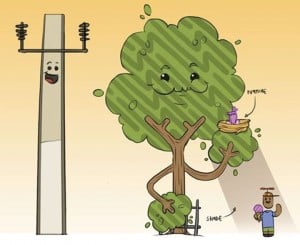 SA Power Networks has also developed a range of vegetation management information to improve how it engages with and informs stakeholders on its vegetation clearance program and legislative requirements.

This includes the development of an animated video to help educate the public about managing the risk of trees around powerlines, starring Trev the Tree and Stan the Stobie (named after South Australia’s unique Stobie poles).

But what do the utility’s stakeholders think? Kelvin Trimper AM, a member of the Arborist Reference Group and passionate horticulturalist, said he has seen a transformation.

“As a foundation member of the Arborist Reference Group, I have witnessed the transition of the group from being very anti-SA Power Networks and its approach to one which now has a proactive and positive relationship with the business,” Mr Trimper said.

“Our early years were challenging as we sought to improve practices and training for those who were actually doing the tree pruning, develop protocols for vegetation management near powerlines and significantly improve communication between SA Power Networks and
all stakeholders.

“This has now evolved to a point where SA Power Networks and its stakeholders are conducting R&D on growth regulators, tree removal and replacement, reviewing powerline friendly species and looking to improve regulations.

“What was once a confronting process has evolved into one which is founded on trust, collaboration and
proactive initiatives.”

For its part, SA Power Networks recognises the contribution of stakeholders.

“We welcome the extensive and positive collaboration we have had over a number of years with Councils and key stakeholders to develop improved approaches to vegetation management around powerlines, and will continue to work together to improve how we manage vegetation near powerlines. The results speak for themselves,” Ms Lewis concluded.