CitiPower is nearing completion of one of the most complex electrical engineering projects the Melbourne CBD has ever seen, upgrading the city’s electricity network as part of a major $250 million project that includes rebuilding the Waratah Place Zone Substation. 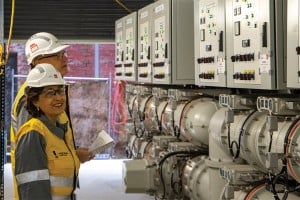 First conceived in March 2008, the Melbourne CBD Security of Supply project was established as a result of an amendment to the Electricity Distribution Code. The Essential Services Commission included a new clause, which mandated CitiPower reinforce the security of supply to the Melbourne CBD to a high level of reliability.

The aim of the project is to ensure that the network has a ‘double backup’ to provide continuous electricity supply if unexpected events occur on major supply lines, such as extreme weather, fires, traffic accidents or infrastructure failures.

The rebuilt Waratah Place Zone Substation is at the centre of the Security of Supply project, which – once fully complete – will allow power to be diverted around the grid so the duration of a major power outage is limited to no more than 30 minutes.

“Our network also supports over 50,000 business generating 25 per cent of the state’s GDP, as well as iconic major cultural and sporting facilities like the MCG,” Marcus Olive, Head of Major Projects at CitiPower, said.

“CitiPower is already Australia’s most reliable electricity distribution network, so it’s not necessarily the risk of outages we’re preparing for; it’s the duration.

“Just this year there was a major electricity outage in New York lasting many hours which had a huge impact on the city. We’re doing what we can to prevent something similar from happening here.”

The Australian Energy Regulator rates CitiPower’s reliability at more than 99.99 per cent. This equates to customers being without power for an average of only 20 of the 525,000 minutes in a year.

With the project currently in its final stages and due for completion in 2020, connecting the recently rebuilt Waratah Place Zone Substation to the Melbourne CBD grid is one of the last remaining hurdles.

The substation is in the heart of Melbourne’s Chinatown, surrounded by some of the precinct’s oldest buildings and finest restaurants.

Deep excavations in narrow laneways close to heritage-listed buildings, as well as beneath Little Bourke Street’s Chinese monument, have required extensive engineering to minimise the risk to these structures, which were built on shallow foundations.

Leading structural and civil engineers were involved to advise on the potential impact of underground works and the piling required to ensure that the structural integrity of neighbouring buildings were not affected.

“While the concept of the project sounds simple, complex engineering is required for this delicate and challenging project, which also illustrates best practice in heritage management,” Mr Olive said.

“To connect the zone substation to the surrounding area involves the excavation of a four-metre-deep trench in one of the CBD’s narrow laneways, and replacing and connecting 10.5km of cables that wind throughout the city.”

This complex work involves digging through heritage overlays, around archaeological finds and working with gas, water and sewerage utilities to relocate services. The vast network of underground utilities was laid many decades ago and services are often not always found where they are shown on maps, creating great logistical challenges.

It’s also important to note that while ensuring reliability was crucial, the Waratah Place Zone Substation has also been designed to help reinvigorate the heritage of the vibrant laneway culture around Chinatown.

That’s why the new Waratah Place Zone Substation retains the character of the original building down to the circular portal windows on the northern wall, while innovative light displays on the façade are destined to become a feature of the Chinatown landscape.

“It’s been a journey to get to this point, with upgrades to the Brunswick Terminal Station, Bouverie – Queen Zone Substation and Victoria Market Zone Substation completed over 24 months,” Mr Olive said.

“This involved installing new 66kV gas insulated switchgear at the substations, transporting a transformer from one zone substation to another and completing major structural work at Bouverie – Queen Zone Substation.”

Given the central locations of all four substations, liaison with other stakeholders – council, the Chinatown Precinct Association, environmental and heritage experts – was crucial at all stages of the works. This has also included a comprehensive communications campaign to keep those in the area and visitors to Chinatown well informed.

Installing 21km of new electricity cables, which travelled over 7km from the Brunswick Terminal Station to Carlton, took two years.

Working in parallel to other projects, the installation meant as many as 30 open trenches were created a day.

“This was a critical stage to ensure an additional transmission connection point was provided to the CBD providing additional security of supply along with additional capacity to supply the fast-growing northern part of Melbourne’s CBD,” Mr Olive said.

Melbourne is an incredibly vibrant and rapidly growing city. Every day, almost one million residents, workers and tourists depend on the continuity of electricity supply to enjoy everything the CBD has to offer.

Currently, the CBD’s power supply can withstand one major fault on the 66kv network. The Security of Supply project has been designed to ensure the city can withstand two major outages, with minimal impact to customers.

“The project’s benefit is not just in preventing outages but also minimising the impact from their short duration,” Mr Olive said.

“The project ensures that if unexpected events occur, such as extreme weather, fires, traffic accidents or infrastructure failures, the network has a ‘double backup’ to withstand multiple outages on the 66kv network and still provide continuous supply to CBD customers.

“It can deliver an alternative power as far as North Melbourne, the Richmond Sporting Precinct, south to the Yarra River and all of Melbourne’s CBD.”

The Waratah Zone Substation introduces this ‘double back-up’ system that can effectively withstand two outages in the 66kV system.

Once the project is complete, the zone substation will create greater flexibility, allowing power supplies to be diverted or rearranged, to withstand a second major outage in 30 minutes or less.

This means that the duration of a major power outage is limited to no more than 30 minutes if two faults occur at the same time.