For the majority of Australians, access to clean and safe water is as easy as turning on a tap. But for the more than 48,000 Indigenous Australians living across 694 remote locations nationwide it is much harder, as the groundwater they rely on can contain high concentrations of minerals that can contribute to disease. Project Gilghi – the brainchild of international engineering, design and advisory company Aurecon and New South Wales Hunter-based electrical engineering company Ampcontrol – is a self-sufficient, sustainable water treatment plant that provides a solution to this problem, delivering affordable and continuous potable water.

The World Health Organisation has estimated that access to clean and safe water and sanitation could reduce the global disease burden by almost ten per cent, but many remote Australian communities still lack access to it.

Not only can high concentrations of elements such as uranium be found in the groundwater in the arid areas these communities are located, but a lack of clean water is also a contributor to the high prevalence of diseases such as trachoma and increased child morbidity.

One of the key problems preventing remote communities from accessing clean and safe water that meets Australian Drinking Water Guidelines is energy.

Water treatment is energy intensive, accounting for 13 per cent of Australia’s electricity use, and for remote communities without connection to the grid, the cost is higher. Infrastructure overcapitalisation is unavoidable if wanting to produce a small-scale drinking water supply, otherwise communities rely on expensive transported water.

The project was developed over three years at Gillen Bore, a remote community about 75km north of Alice Springs. It was sponsored by the Northern Territory Government through a $70,000 Municipal and Essential Services Special Purposes Grant and developed for the Arrernte people as the custodians of the land and Alkupitja Land Trust.

In the past, the community of Gillen Bore had access to bore water, with a new bore sunk in 2014. Despite this, they relied on the continued transport (150km round trip from Alice Springs) of potable water due to high salinity, hardness and low pH levels in the bore water. This was a costly and inefficient expense that nationally in 2017 cost the Australian Government more than $13 million in transportation fees.

Aurecon and Ampcontrol saw an opportunity to address long-overdue water needs of remote communities like Gillen Bore. The team wanted to challenge traditional engineering design with a focus on sustainability and approached the issue from both the treatment process and energy design disciplines.

Julian Briggs, Design Director, Water and Wastewater Treatment at Aurecon, said, “It was realised that the change in rate of technology has not been matched by a change in the way developments have been implemented in the water sector.

“This presented an opportunity to capitalise on renewable power opportunities by comparing the levelised cost of electricity versus unvalued capital in the power grid system.

“For example, pumps are usually designed for peak output and the associated power demand, which results in the installation of many underutilised pumps, often resulting in a large amount of standby equipment. Ampcontrol’s new engineering approach to power management allows for a smarter, more efficient and cost-effective solution.”

Traditionally, water treatment systems operate continuously, whereas Gilghi’s innovative design makes smart use of available solar power to run the plant and charge the batteries during the day. To achieve this the team developed a specialist electrical control system that uses multiple power sources to purify the water, then feed that clean water into the community’s reticulation system.

After around 18 months of operation, system availability of Gilghi has been 99.6 per cent, and the standby diesel generator was only operated for 18 hours in total over that period.

By applying a human-centred approach and specifically focusing on, and addressing, the community’s wants, needs and pain points, Gilghi was able to deliver meaningful, sustainable value to the local community. How does the system work

Gilghi’s flexible design enables the system to meet larger supply requirements and different treatment challenges without adversely affecting the cost per litre. Comprising photovoltaic (PV) solar, batteries and a back-up diesel generator, it is designed to take feedwater from a range of sources, including bores, streams, brackish and saltwater.

The water is stored in an inlet tank before it passes through three stages of treatment:

Once treated, the water is transferred to a storage tank and is ready to use. In terms of waste stream processing, an evaporation pond is built to treat the brine from the RO process.

The system can produce up to 28kL of potable water per day.

“Traditionally, water treatment systems operate continuously, whereas Gilghi’s innovative design makessmart use of available solar power to run the plant and charge the batteries during the day,” Mr Briggs said.

“The design took a modular approach to inclusion of the process units that provide the water treatment, allowing simple changes to the design to adapt to different feedwater conditions.

“This approach reduces the amount of bespoke design required and thus the overall cost of delivery, historically a significant challenge for small-scale systems.”

Mr Briggs said that installation time was another efficiency gain, with the fully off-grid unit up and running within just a few days and run remotely through satellite communications on renewable energy.

The critical operating functions have also been automated to help local communities to conduct routine maintenance on the devices, creating jobs and opportunities in the process.

“Simply put, the happiness on the faces of the Gillen Bore community at the opening ceremony communicated the importance of this water to their livelihood better than words ever could.” 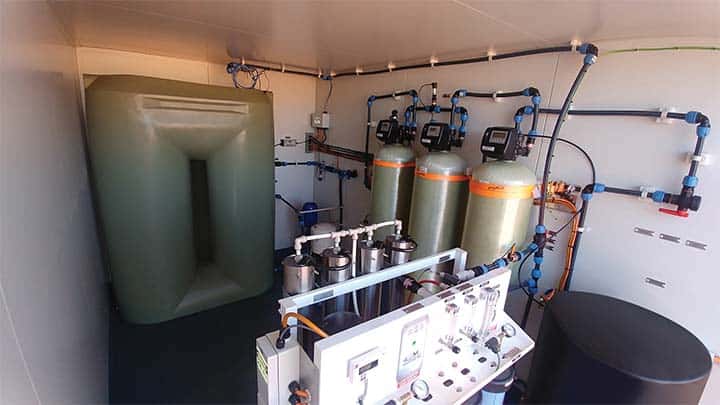 Due to the project’s remote location, the team had to develop a ‘plug and play’ approach, with all components of the plant prototyped, assembled, connected and tested at Ampcontrol’s facility in Newcastle, NSW.

“We ran batches of brackish (salty) water through the unit and tested the treated water quality to make sure it met the guidelines. Due to the remoteness of the location, anticipating any issues prior to deployment in the Northern Territory was paramount to success,” Mr Briggs said.

“Reducing time spent installing the unit in the field is a critical element to the overall project cost. Careful thought had to be given to installation and commissioning activities that are typically required.

“Gilghi has levelling legs attached to the container so minimal site clearing and preparation works are required. The solar panels are designed to sit on an awning mounted on the roof and side of the unit.

“For the Gillen Bore unit, the panels were stored inside the container for transport, then erected in the field. The unit was up and running within just a few days. For the latest iteration, the PV array is now hinged and folds down for transport and then simply folded out during site installation, further reducing site set-up time down to 1-2 days from delivery of the unit to producing water.”

Ongoing maintenance of the unit was another key challenge – one that is typically faced by such installations of relatively complex technology in remote locations. To overcome this, Gilghi was designed for simplicity of operation.

“The critical operating functions are automated, with the control system identifying and performing the backwash and regeneration functions which are critical to quality, remotely monitored via telemetry by Ampcontrol,” Mr Briggs said.

“We have also designed the system for simplicity of maintenance, avoiding the need for storing and replacing hazardous chemicals in the unit. For Gillen Bore, this allows the local outstation service provider, Ingkerreke Outstation Services, who already visit the site, to do the more routine maintenance – an added benefit to the community by providing training and additional employment opportunities for the mostly indigenous local workforce.” A roadmap for safe water worldwide

“The project provides a roadmap for how Australia and other countries can meet the ambitious target of the United Nations’ Sustainable Development Goal 6 – to provide safe and affordable drinking water for all by 2030.

“Aurecon and Ampcontrol would love for other similar communities to be afforded the same opportunity.

“We believe Project Gilghi not only represents the start of a long tail of benefit for remote communities across Australia, and around the world, it is also a solution that highlights the achievements and ingenuity of the Australian engineering profession.” Project Gilghi was recognised by the Australian Water Association in 2020 as the New South Wales Infrastructure Project Innovation of the Year. It was also recognised in the Social Impact category at the 2020 Good Design Awards for its breakthrough design, and at Engineering Australia’s Australian Engineering Excellence Awards 2020, amongst a number of awards.