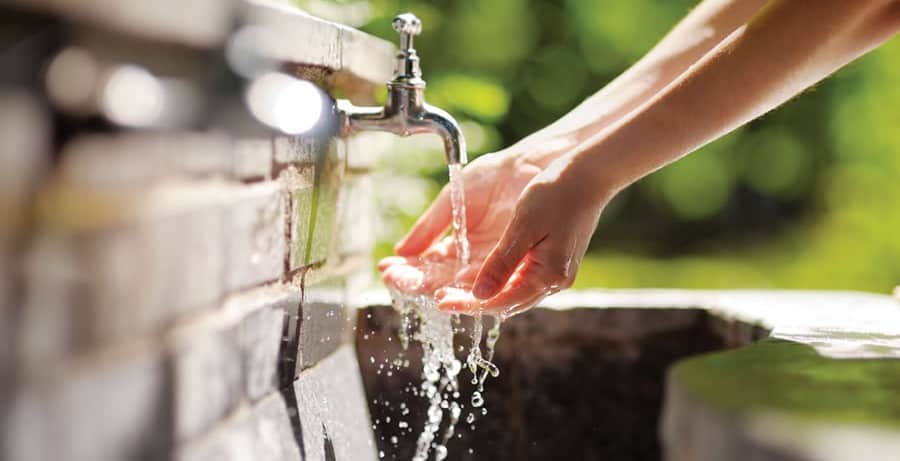 Compared to other infrastructure and essential service sectors, the urban water sector is often overlooked. Nevertheless the fundamental requirements of having world class urban water systems and infrastructure (with assets with a value of over $160 billion as at 1 July 2015) delivering the necessary public health, liveability and productivity outcomes of our cities and communities cannot be understated.

Urban water in Australia has been ‘self-­funded’ and corporatised since the early 1990s, allowing newly formed businesses to seek new innovations and private sector partners to drive efficiencies without loss of service.

It recovers the costs of these services from customers, and does not rely on budget funding or large announcements to construct infrastructure.

While bills to our customers have increased to fund water security, satisfaction levels remain high and complaints (as recorded by various state Ombudsmen) are significantly lower than many other sectors.

All of which means in some policy makers’ views, urban water lacks a burning platform for reform. However, to avoid urgent and costly decisions in the future, there is a strong case for renewed national policy leadership.

Last November, WSAA, in partnership with Infrastructure Partnerships Australia (IPA), released the report Doing the important, as well as the urgent: reforming the urban water sector.

Launched by Treasurer Scott Morrison, the Report calls on the Commonwealth Government to drive a new five-­year program of reform across the states and territories, supported by meaningful financial incentives and including a new National Water Initiative.

But to continue to do that, the regulatory and governance structures they operate in need to be refreshed to promote the long term interests of customers. Treasurer The Hon Scott Morrison MP launches the report Doing the important, as well as the urgent: reforming the urban water sector.

Over the last few years there have been a series of reports by federal bodies, such as Infrastructure Australia, Harper Competition Review, the now abolished National Water Commission and the Productivity Commission, that all point to an emerging need for a renewed commitment to national leadership in water management, coordinated infrastructure planning for the built environment, and a focus on new ways of regulating the sector to focus on customer value and provide the right conditions for more innovation.

With existing settings, we are poorly equipped to meet this need. Most recently, on 17 February 2016, Infrastructure Australia released its Australian Infrastructure Plan.

While media reporting focused on transport and roads, there were also recommendations in the Plan relating to urban water, including a recommendation for better independent economic regulation of the sector and the establishment of a national water framework.

Specifically, recommendation 6.12 states that the Federal Government should work with state and territory governments to establish an independent national body to deliver a National Water Reform Plan. WSAA supports this recommendation.

The challenges are many for the urban water sector: As we look to the future, urban water needs to be better integrated in city planning, including coordinated integration of stormwater to meet community expectations of our highly valued liveable cities and communities.

In the Australian Infrastructure Plan, there is a strong theme of liveable cities and the built environment, and a specific recommendation that water assets be continually assessed for climate risk into the future.

The demands on urban water utilities are continuing to evolve, in line with changing community expectations and requirements, meaning the sector delivers outcomes beyond providing clean water and removing wastewater from homes and businesses.

Urban water utilities play important roles in providing everything from clean beaches and waterways, through to contributing to public health and national economic priorities.

At present, opportunities to improve liveability are foregone due to unclear roles and responsibilities between policy makers and corporatised water utilities.

Beyond that, water utilities are well placed to harness the benefits of the digital transformation currently underway in the economy.

Utilities collect millions of data points, demonstrating the growing benefits of artificial intelligence; utilities with thousands of kilometres of pipes and hundreds of facilities are ripe to reap the benefits of the Internet of Everything (or the Internet of Things) and finally water utilities deliver essential services 24/7, 365 days of the year.

With more than 80 per cent of Australians using a smart device, they are increasingly agile and information driven digital citizens, our digital customers.

The explosion of wet wipes as an issue in the past two to three years has shown that immediate and grassroots engagement with customers using Facebook and Twitter can rapidly bring an issue alive and drive change very quickly.

Other more recent benchmarking projects include energy management in networks and treatment.

Together with the highly successful collaboration with Isle Utilities (based in the UK) to assess pre­commercialised technology and innovations across the entire urban water cycle, utilities are working hard to be as efficient and effective as possible, while looking over the horizon at emerging technologies.

WSAA will continue to advocate for renewed national policy leadership – backed with meaningful incentives – to elevate the consensus about the importance of good water policy into an actionable national leadership initiative.