Sydney Water manages a large and complex network of over 22,000km of water mains. About two-thirds of these assets are buried, which presents significant access challenges. The replacement of mains is expensive – Sydney Water spends up to $90 million a year on water main renewals. In order to reduce the cost of replacing pipes and to minimise disruption to customers, Sydney Water is implementing current, emerging and innovative new technologies to reduce leaks and breaks in its network.

A number of the technologies developed, adopted or adapted are already incorporated as “business as usual” at Sydney Water, with others in development or in the pilot phase, pointing to an exciting future.

The leaks and breaks program integrates a series of projects which are running in parallel – critical pipe failure prediction, sensing and analytics, smart lining for pipes and the use of robotics.

In collaboration with Australian Utilities, UWKIR and WaterRF, Sydney Water led a very successful research and innovation project on pipe failure prediction. Sydney Water has now partnered with the CSIRO’s Data 61 to implement this research to improve assessment of water pipes using smart technology. This provides the ability to better predict where pipe failures will occur.

Tool kits have been developed from the research including prioritising the pipe cohorts, a data-driven model, a condition assessment framework, a corrosion prediction model and a pipe failure prediction model. These will all be part of Sydney Water’s normal business from 2021.

This research has already led to a pipeline replacement saving of around $10 million. The research has also contributed to the reduction of renewals, with improved targeting lowering the cost from $50 million to $30 million per year.

Different sensors can be connected to the robots to detect key parameters for pipe performance, such as wall thickness.

The use of robots to inspect pipes is currently providing the ability to better target vulnerable sections of pipe during renewals. Use of robots will allow Sydney Water to reduce pipe renewal costs by around 20 per cent.

The robotic tools allow Sydney Water to inspect pipes safely and cost-effectively. They are able to identify vulnerable sections of water and wastewater pipes for replacement or repair. These robotic devices are now used in business operations.

1. Rapid Response Thickness Tool (R2T2)
This robot is designed to assess a water main either side of a break during the brief window between the break and its repair. It is capable of operating in cast iron pipes between 375mm and 750mm diameter. Information being gathered is already helping to identify pipe segments near breaks that are vulnerable, making it possible for Sydney Water to take steps to minimise repeat failures to the same customers.

2. The Thickness Tool for Planned Operations (T2PO)
This robot is designed to be used in a water main during a planned shutdown. The objective is to identify and replace vulnerable sections of a critical main and keep sections that are structurally sound in service.

3. Hand-Held Tool
One of the sensors developed for these robots has been packaged into a hand-held measurement tool to manually take spot thickness measurements of a pipe wall.

4. Wall Thickness Maps
These robotic tools are equipped with multiple sensors. Interpretation algorithms analyse the signal acquired by on-board electronics to obtain the remaining pipe wall thickness under each of the sensors. These are then assembled to generate a pipe wall thickness map.

Patch dimensions can be extracted for use with Sydney Water failure prediction tools to assess the pipe condition.

Smart linings for pipes and infrastructure 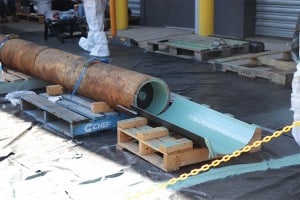 Sydney Water currently spends $120 million per year on linings and coatings for water and wastewater pipes.

A collaborative Cooperative Research Centres program, championed by Sydney Water and led by the Water Services Association of Australia (WSAA) with involvement from major Australian utilities, 13 suppliers of coatings and linings and three universities – Monash, UTS and Sydney University – is underway. The CRC Program supports industry-led collaborations between industry, researchers and the community. The program is now conducting trials to test and validate existing innovative linings and coatings. In conjunction with the trial, UTS is developing a leading-edge sensing capability to provide non-destructive quality assurance testing.

Innovative linings extend the life of existing pipes, improve liner performance and also enable quicker return to service. It is expected that innovative lining technologies will generate a minimum ten per cent saving on pipe replacements, with this saving to increase over future years.

Three lining technologies are currently being trialled by Sydney Water:

1. A rapid-setting liner sprayed onto pipe interiors is being tested by UTS, in collaboration with other universities and representative companies from the lining industry, to improve existing lining products and develop new robotics and sensing technologies for liner application and pipe inspection.

A spray-lining rig has been imported from the UK to trial new pipe lining materials. The multimillion-dollar project is funded by several partners, including Sydney Water and the Commonwealth Government. Australia is expected to represent five per cent of the smart lining market over the next decade, which is estimated at over $60 billion globally.

2. The Insituform cured-in-place-pipe product is being tested in conjunction with Comdain in Sydney Water’s 600mm Pipe Test Bed.

InsituMain is a thin-walled, tight-fitting rehabilitation product that consists of a glass reinforced felt tube which is impregnated with a thermosetting epoxy resin. An internal polypropylene coating ensures the pipe’s hydraulic capacity is maintained or increased despite the small diameter reduction.

Installation is via a process called “inversion” where compressed air is used to unravel the uncured liner into the host pipe, in a flexible state. Once the liner is in place it is cured using steam. In most cases, the CIPP liner is installed and cured in a single day, The end result is a structural, jointless pipe-within-a-pipe, providing protection against corrosion, build up and leakage, with minimal impact to the community and stakeholders.

3. Sydney Water has engaged Interflow to undertake a trial installation of SaniLine® W, a trenchless cured-in-place-pipe product suitable for pressure applications.
SaniLine is a lining system designed to span holes and gaps in the host pipe at normal operating pressures.

SaniLine consists of a resistant polyester-yarn textile liner with a polyurethane or polyethylene coating. Installation is also via inversion.

Once the liner is in place it is cured using water. In most cases, the CIPP liner is installed within six hours and cured within a single day.

Sydney Water, the New South Wales Sensing Network (NSSN), along with utilities in both Australia and the UK and five leading universities, are working together to investigate, develop and test emerging sensing technologies to better predict pipe failures. These include hydrophone arrays, quantum gravity sensors, acoustic sensors and pressure transient sensors.

The application of this defence industry capability was recommended by the Chief Scientist to the Sydney Water team to consider. As part of this recommended approach, the project has two significant innovative projects on quantum sensing and optical-fibre hydrophone arrays.

Professor John Close from the Australian National University (ANU) is the lead researcher on this project and over the next ten years,quantum gravity field and gradient sensors will be developed. They can be used to build a 3D map of the gravity field relating to the density of material around pipes, and will verify the underground moisture and leaks in pipes. They will allow workers to see through the ground, using gravity to identify buried objects that are not possible to detect using alternative technologies.

The optical-fibre hydrophone arrays are packaged by the University of New South Wales (UNSW), with the defence industry supplier Thales providing the hydrophone technology. This technology was originally developed for ocean monitoring and is currently used by Thales Australia for submarine detection.

Arrays will be put inside fibre lead cables which will monitor and produce necessary data output and will be tested in Sydney Water’s 600mm pipe test bed.

Manufactured locally, both technologies will create opportunities to better identify which sections of the pipe will require further condition assessment.

Current leading-edge acoustic sensors can be used to detect frequency, sound levels and other key parameters to enable leak detection.

Leading acoustic sensors and pressure transient loggers will be deployed in the Mt Pritchard, Liverpool and Bankstown pressure zones, in Sydney’s south-west and in the CBD, with digital metering and flow/pressure monitoring to verify the value of smart sensing in networks to reduce leaks and predict breaks.

SA Water has demonstrated a 50 per cent reduction in reactive maintenance in the Adelaide CBD, using intelligent sensing and data-driven interpretation, and they are transferring knowledge to Sydney Water. 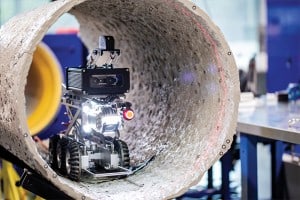 Drone-mounted LiDAR will assess the moisture around and wetness of water pipes by correlating variations in light intensity with surface moisture, and then processing the data using advanced algorithms.

Sydney Water will work closely with Hunter Water and the University of Newcastle to verify whether LiDAR satellite technology will be of value when used with a drone to assess moisture, so that higher risk pipes susceptible to external corrosion can be detected and preventative measures enacted.

Paul Higham, Head of Service Strategy and Planning at Sydney Water, said, “This is an exciting time for Sydney Water and the water industry. We are implementing current and emerging technologies and innovating exciting new sensors that will enable improved services to customers.

“The collaboration between utilities, research institutions and the private sector has led to significant fast-tracking of the implementation of innovation and has created a number of benefits.

“As well as saving costs and extending pipe life, the technology can reduce out-of-service times and excavation work during water asset renewal works that inconveniences motorists, residents and the public.”